Highlighted Video: (Previews) Games to Look For - May 2019

Despite performing worse than the original when it comes to physical sales, the explosive sequel has ended Days Gone's streak at the top.

The beginning has already been shown, and now we're here to dish out some more advanced chaos in the wasteland.

Here is our Rage 2 livestream replay

We played the game for two hours yesterday, and we've got the whole thing for you to watch at your leisure.

Check out our Rage 2 gameplay on PC

We tried out the first 30 minutes of the game before heading into Eden Assault, seeing what the wasteland has to offer us.

Rage 2 is speeding onto our livestream today

Tomorrow marks the release of the explosive sequel, so we're heading in to see what's what in the world of Rage 2.

We'll be getting the game's first major expansion in August, with other free updates landing in the months between then and now.

Remember when that leak revealed plenty of games before they were announced? At least Bethesda can laugh about it.

Rage 2's launch trailer lands ahead of next week's release

Here we get to see General Cross, and all of the activities you can get up to in Avalanche Studios and id Software's chaotic sequel. 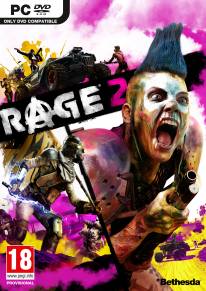