Whilst taking shelter from the blistering Roman sunshine, we were lucky enough to sit down with three of the key developers behind Total War: Rome II. Creative Assembly's Al Bickham, James Russell, and Jamie Ferguson talk us through a variety of Rome-centric topics, from the historical setting, through to new features and subtle improvements set to appear in their strategy sequel.

On why it was time to return to Rome:

AB: Part of me thinks it wasn't really our choice really, because it's what the fans asked for... So many people over the years have been going "yeah, enough of your Shogun 2 DLC, where's Rome?". The time was right, I think. And as well, the whole Total War system has evolved so much in terms of the campaign systems, in terms of the battle systems, the intricacy of that. It's a very different game from the original Rome, which was a lot simpler. You play the two side by side, and this is immeasurably more intricate.

On the historical setting:

JF: We start in 272 BC, with Rome just beginning its conquest of the peninsula of Italy, and from that point on it's up to the player how things progress. It's up to them where they go, whether they go to the east and start destroying the Greeks and then the Persians and the Egyptians, or they head north and destroy the Gauls, the Germans, and the Britons. It's entirely up to them. Or if they fancy doing something completely different they can actually play the Carthaginians, or play the Egyptians, or maybe play the Gauls or even the Britons themselves.

On how Rome II differs from previous entries in the series:

AB: In particular, it's scale and detail is beyond anything we've achieved before. We take in so much of the scope of the ancient world, right from Spain to Afghanistan, right up from the northern point of point of Scotland right down to the Horn of Africa. So we're taking in a massive amount of factions and cultures, different terrain types, different weather types. So really that's about variety, and about constantly providing the player with different gameplay experiences all the time. In detail terms it's just the highest fidelity game we've ever made. You can get down and see individual soldiers on the battlefield, in so much detail, more detail than we've ever been able to provide before... Rome II also evolves from key systems in the game and brings some new ideas into play, we've got some new features in there.

JR: What's interesting about our journey into Shogun 2 and Fall of the Samurai [the standalone expansion] was really what we did was focus in, polish the gameplay, and we could go into great depth into one single culture. But with Rome II what we're doing is taking those lessons and rolling out the scope. So Rome II is all about this epic sense of this massive world to conquer. What's really exciting for us is there's a huge variety of different cultures, different cityscapes, different kinds of units, just whole different cultures. You've got barbarian tribes, you've got eastern kingdoms, you've got all the Romans and the Greeks and so on. There's so much variety, and the map is so grand and epic, and that's what's really exciting.

On how different the various factions are:

JR: We've got a huge array of cities. They all look very, very different. If you're playing as the barbarians your cities look totally different. You've got these settlements, wooden settlements, whereas if you're playing one of the eastern factions you've got these grand stone cities in the desert, so there's visual variety. Also obviously the units that you've got are all very, very different. They'll have different emphasis; so you'll have shock infantry emphasis for one faction, whereas another might be mainly focussed on horse archers where really your role is to disrupt infantry. So there's different optimum strategies. But also we've got different historical story lines and plot elements that are going through the game to really make you feel immersed in your particular factions. So there's a whole sort of politics layer where you're having to make sure your rivals aren't getting too big for their boots. All of those little story line threads feel very, very different. They're very tailored to the culture that you're playing.

JF: How you play the game very much depends on which culture or which faction you pick, and in terms of how you control that we've actually got political systems within each faction, so you get to do things like fight out the politics in the way that Rome fought its politics... You also get to choose how your soldiers develop, what they do and how they fight. All of these things create a rich and very involving experience.

On campaign and battlefield AI:

JR: We've got more resources working on AI than ever before. We've poured a lot more into it. So we've got various different programmers working just on campaign AI, different programmers working just on battle AI. The campaign AI has really progressed. I think we made great strides with Shogun 2 and we're just taking that further. The AI has much more sophisticated processes going on. Also, we wanted to reveal some of that thinking to the player, so that the diplomacy gives you more insight into what the AI is thinking and doing. And on the battlefield we've really worked hard so the siege AI has a concept of street layouts and how to defend different areas of the city. So there's a lot of new behaviors going in to make the AI a really worthy opponent.

JF: We now have a tactical view that is accessible from either a mouse button click, or just using your mouse wheel, you can actually zoom straight out to have a complete overview of the entire battlefield. That'll show the lines of sight for all your units. That'll show you the disposition of all your units, and it'll show you any of the enemy units you can see. That will also give you an idea of how things are going. We have a balance of power graph, that basically allows you to see how the battle's going in terms of wining or losing, who's got the most men on the battlefield at that point in time. Also, on top of all of that we have a lot more feedback that comes from the game itself in terms of men and what they're saying and what they're doing. So as you're moving around the battlefield, if you zoom in close enough you'll start to hear either panicking or men cheering and getting excited because they're about to destroy their enemies.

JF: We always felt that it was important that the player has an understanding of where they were in the world, and that what they look at on the campaign map has some bearing and relevance to what they actually see when they go down to the battlefield, and that they can actually as a result of that choose their battlefield and choose the ground that they're going to fight on, because that's actually a very important part of warfare and strategy as well. Finding the right place to defend, finding the right place to attack, are the most important parts of war.

On combined land and naval battles:

JF: We found in the end that best approach was actually just to take what we do with the land battles and actually take that and just adapt it in terms of naval combat. For anybody who's played any of our previous games they should find it pretty easy to pick up, and if you've never played an RTS game before it should still be pretty easy.

JF: There's a co-op multiplayer campaign. There is also 1v1, so you can actually take your friends head-on and try and destroy them... We have an ability within the multiplayer games for single battles where you can just pick any battlefield that's on the actual campaign map and fight a battle there. You can fight any of the sieges that are available in the game, you can fight a coastal battle, you can fight a sea battle, and you do that directly by selecting a point on the campaign map and fighting a battle from that point.

On the length of the campaign:

JF: What we've found is people play at different paces and have different amounts of time that they spend with the game. What we've done is give them objectives that they can achieve, a short or a long objective, or they can go for the global strategy and conquer everything and turn it your colour. So the length of game is entirely dependent on the player and how they approach the game. Do they want to steam through it really quickly, go far a kind of Zerg rush mentality and just try and capture as many cities as they possibly can? Obviously there are down sides to that; you get public order issues and so on that may actually slow you down quite a lot. Or you can be a very considered player and you might actually expand very slowly and plan every single element meticulously. In gameplay terms you're talking about anywhere between 25 and 90 hours of gameplay. It's really up to player and how they play the game.

On how the game will work on an average PC:

AB: We're pretty scaleable. We've released our mid-spec and it's not really that much higher than the mid-spec for Shogun 2. A mid-range system will play Rome II really nicely... Of course if you've got a mega-rig, we'll take all the power you can give us and make the game look really shiny, but we're scaleable. We're keeping it as scaleable as we can, because obviously we don't want to scare people off from playing it. The common conception that you need a mega-rig to play Total War just isn't true anymore.

Total War: Rome II is set to be released on PC on September 3. You can read our hands-on impressions of the prologue campaign here.

Fans of the series have been waiting for this sequel for many, many years. Happily, it doesn't disappoint.

Total War: Rome II getting Rise of the Republic campaign

Explore the Desert Kingdoms on the 8th of March.

Set in the third century, it's time to see an Empire Divided.

Creative Assembly worked together with the Ashmolean Museum in Oxford, on exhibit. 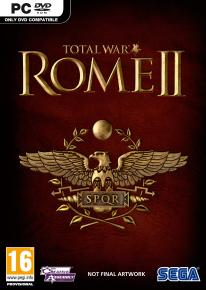