PGA Tour 2K21 is still in its infancy, a little over one month old to be exact. Even in its early life cycle, we are starting to see content updates roll out across the many, many greens, the first of which dropped a few days ago. To get a further understanding into what developer HB Studios plans to achieve with PGA Tour 2K21's first update, we had a chat with the title's Senior Producer, Shaun West. You can read the transcription of the interview below.

Gamereactor: What can we expect from this update?

Shaun West: We have added two new modes for online play. These are both played over three holes to make it a little more accessible, since nine holes can take a bit too much time for some. One of the modes, the high roller one, is played between two players in a three hole skins game with stakes a bit higher than usual. The other mode is for two to four players and consists of regular stroke play. It's all about getting the lowest score over three holes. This is a mode that would have taken way too much time over nine holes, but over three holes it is more than possible to finish it in a reasonable time. Personally I spend a lot of time playing against random players online to get in contact with people all over the world, and this gives me the opportunity to get even more games in, and meet even more people in a shorter span of time.

GR: Is the difficulty setting the same as before? We know for a fact that some players wants both harder and easier settings for the matchmaking aspect of the game.

Shaun West: The settings are still on the Pro preset, which also means you'll have the three putt previews available for the three holes. We know some players want other difficulty settings, but for now we don't want to spread the userbase too much. This might change in the future of course, and technically there is no problem for us to add modes with different difficulties in the future, if we decide to go in that direction.

GR: This summer, ahead of release, it was mentioned that cross-play would not be available at launch, but with an underlying tone that it might come in at a later point. Is this something you are working towards to gather the player base more?

Shaun West: Cross-play is something every multiplayer video game should have of course, but as of right now, we are not working towards it. There are a few too many challenges between the platforms to make it work perfectly. We are aware that the market for PC is smaller than it is for consoles, and we continue to work towards making PC players more active and engaged. For now, we unfortunately don't have the resources to dedicate to this area.

GR: There have been some challenges after release with bugs. How often do the team work on fixing these?

Shaun West: There are some bugs, but we are well on route to fix as many as possible right now. One of the main issues fixed in this update will be the bug where you would get stuck in the water if you dropped the ball near the edge of the water, which a lot of players found frustrating, naturally. Other bugs, like not being able to see the lie-grid in the sand traps, are things we are working on solving as soon as possible.

GR: Several players have concerns that its possible to "cheat" the tempo difficulty by missing fast on purpose. Is this something the crew at HB Studios are looking into?

Shaun West: As we see it, there are no real concerns regarding the swing tempo as of today. As an active golf player myself, I play with a natural fade in my golf swing, which never makes the ball go straight. The adjustments players make to the tempo replicates much of what we find in real golf, to the game. We are of course monitoring the situation and will make adjustments if we see it being needed.

Together with the two new modes, there will be additions to what you can wear in MyPLAYER. A new polo shirt from Adidas that has yet to see the store shelves being one of them. We asked Shaun what to expect from here.

GR: Will we get new brands and clothes further down the line, or does the current brand have exclusive rights to the clothes and gear in-game?

Shaun West: We are always working towards adding more brands, and there is absolutely no sort of exclusive rights to this part of the game. We hope to add new clothes and brands regularly, but there are deals that have to be made before it can happen.

We'll just have to wait and see if we can get Ping clubs or Nike clothes in the future, but at least its not out of the question from what we hear from Shaun West.

The list of changes made in this update may not have given all the answers some players wanted, but it is also obvious changes have been made that didn't make the patch notes. We'll have to wait to see what all the changes are, but until then, you can read the full patch notes here.

ARTICLE. Written by Daniel Andersen on the 5th of October 2020 at 17

Here's hoping Eirik avoids too many bogeys when playing this year's golf game from HB Studios.

It's almost time to head to the virtual golf course with 2K. The game is set to get more info next week. 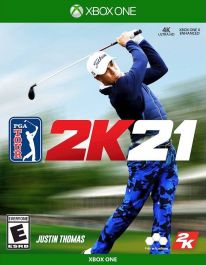