The racing genre is heating up. Burnout's Criterion added some much-needed sizzle to EA's Need for Speed series last week, cruising the franchise to a top three position in the UK charts behind Call of Duty: Black Ops and Assassin's Creed: Brotherhood. Gran Turismo 5 hits retail after several false starts and half a decade in the development garage.

Roaring into the rear is Test Drive Unlimited 2, due to join the race early next year. The franchise received critical acclaim in 2006 with its first entry, which let players race high-end sports cars around Hawaii in a massive sandbox environment. At a recent TDU2 event Gamereactor Italy's Lorenzo Mosna quizzed the developer about returning to the franchise, retaining the core values and how Eden has avoided the bane of drivers everywhere: traffic jams. In the driving seat: Executive Producer Vince Farquharson.

Eden's ambition for the title is set very high. Aren't you afraid of overwhelming yourself?

Yeah! I mean, we have a big team and we've been working for a couple of years. So yes, it's super huge, it's very very ambitious but, you know, that's what it makes it worthwhile. It is challenging. It's not just "big", it's also innovating. We're doing a lot of things in the online space, we had a lot of discussions with Sony and Microsoft to let them allow us to do the things we wanted to do. We think it's worthwhile. We really believe in creating this persistent online world that must last for years. And to do that you have to make it big, you have to put a lot of variety in there. That's what we're trying to do.

You've talked about four strongholds: competitions, social, collection and discovery. Can you tell us what these components are about?

Basically you'll have a special level system which is very familiar to pure MMOs but we actually split into four categories. So you'll have "Competition", which it's about getting points by winning races and do anything competitive in the game. "Discovery" is about every time you drive in a new road, find a new shop... everything will give you discovery points. With "Collection" the more houses you get, the more clothes you get, the more furniture you get, everything goes into the collection points. "Social" will give you points by making friends and doing social stuff. All these components will give you a summary of what kind of player you are and what kind of player you are meeting. So if you find someone playing online and look at his points you will immediately say "hey this is a competitive guy" or "this is a social player", etc.

Talking about the social component, you said that there is no difference between the online mode and the single player campaign. Can you elaborate?

When you start the game you'll never choose "single player" or "multiplayer". The world is just populated by the players doing their own campaigns and interacting with each other. You can choose to interact or not interact with them, it's up to you. If you unplug the online you'll continue to play; the challenges will become easier since no human players will be there to drive in the same races you're doing. You'll basically spend a lot of time doing your own things, but you'll also have the possibility to interact with the players doing social or competitive stuff with them. Of course you'll get competitive points also from your multiplayer competition, not only from the single player competition, so it's basically up to you.

So do you think that people will actually make friends by using this game?

Yeah we think so. Definitely. In every successful MMO you won't see people just meeting there, but also people making actual friends. We're trying to give the players a lot of tools to do that.

Are you putting a limit to number of people that can be connected in a single game? I mean, Ibiza is big but with thousands of players in that single map you'll find traffic jams in every single road...

Yeah you're right! Let me explain the way the game works: the map is very big, you can have thousands of people in there but we decided to put a limit. We experimented with several numbers of players and we decided that a hundred of player icons showed in a single map is the right choice. To choose the people we will show you in your game we will use these criteria: your friends will be in there, anybody which is roughly at your same level will be in there, anyone who plays the game in a compatible way will be in there.

Talking about the number of other players' cars you can actually see in a single road, we limited them to eight. So you can see eight different players in a single instance. You won't find traffic jams. It's important to understand that we've created a system that chooses the right players to show you. We won't just add some random people in your game which don't interest you or things like that.

A short one: why Ibiza?

The original was based in Hawaii that is pretty much the dreamed holiday location for many Americans. But we needed to find something similar in Europe, so we looked what islands have the right size, what islands have interesting routes with the right balance between cities and countryside, with the right mix of roads and environments and then, importantly, the islands that have available satellite data. At the top of that list we've got Ibiza which is a popular holiday destination in Europe, very famous in the 80s for that kind of Club Tropicana - swanky style. It seemed the perfect setting and a relevant setting for gamers.

Is the island realistic?

It's pretty realistic. We started off with the satellite data and we made it like it is. It's accurate. We just tweaked the roads a little, made as few changes as possible. It's realistic, but it's also very fun. Of course not every single house is identical as the real houses: we chose some houses that are typical of that island, we picked some key landmarks, some key locations and we designed them accurately, and then we have generic kind of houses. Some roads are very close to the real ones, some others are exactly the same you'll find in Ibiza. People who know the island are gonna know the locations, they will drive around and go like "wow, I know this place".

Talking about handling and responsiveness of the cars, did you improve the physics?

Handling is completely different from the first game. The first one was based on the driving engine of V-Rally 2, but today it really shows its age so it was very difficult to create a game based on the same engine today. The system we created is way more nice and flexible, it allowed us to do things we weren't able to do before in terms of handling. The code is more solid, all the cars are different and this is very important to satisfy the taste of all the different players that are going to play this game. Players can also choose between an arcade mode or a simulation mode that allow them to play in a very different way: you're gonna pick your favorites style which is probably very different from someone else's style.

Any plan for DLC?

Yes. We're now focusing on the main product, but we have DLC plans, we will support DLC. The game is a proper live MMO environment, so it's possible to drive around and find a car that you've never seen before. You will wonder: "Where does it come from?". Let's suppose this car is a new Ferrari: you'll go in the Ferrari showroom and you will find it there. Everything is done through the game, there is no need to surf the marketplace to find the new cars, even though you can buy them through the marketplace as well. But you don't have to.

Why do you delayed the game to early 2011? Do you have a precise release date?

I do but you don't. (Laughs) There are still some discussions going on about the exact date it's gonna be, so it's not been announced yet. The reason we delayed the game is simple. You often find yourself in these kind of situations in which you're getting to the end and you have a choice between finishing it and pushing it out, or saying: "Look, there are still some twenty things we can improve and if we use some more months we can make these twenty thing look better. We've put a lot of time, efforts and money into this. We think it's pretty good, but for the expense of two or three more months it can be really good." It was a tough decision, but I think we finally came up with the right decision.

REVIEW. Written by Gillen McAllister on the 14th of February 2011 at 17

"If TDU2 let you approach driving the world's most coveted cars with as much ardour as it does with life's other excesses, we'd be happy to toss the keys to our other racing titles into the toilet."

"We are more than confident with respect to the quality of this franchise."

50 people laid off by Atari

Atari with a rare number one

Headed for its February release

PREVIEW. Written by Gillen McAllister on the 17th of January 2011 at 13

Eden's sandbox title returns to continue its attempt at dominance in the genre. But as we discover, while it's looking for pole position, we're lucky to make it past the first corner. 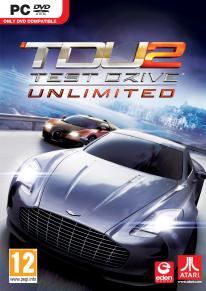