Either one person gets burnt out trying to do all the work, or neither side offers a serious commitment to holding things together.

Capcom knows more on the subject than most. The divorce list is high. Outsourcing projects sounded like tantalising proposals, but lead to more acrimonious splits than fond memories.

Recent history's enough then to worry when DMC was first revealed, though no excuse for the venomous tirades directed at either Ninja Theory or Capcom. Sure, past scepticism has made us wary about what shape the eventual offspring would take, but both companies have obviously seen potential in each other's work.

And what we see and play today, in a sit-down hands-on session with the game, and extensive interviews with the team, prove that both sides want to make this marriage work - and bring the best out of each other.

It takes Ninja Theory all of fifteen minutes - barely a quarter of an hour of clear, concise explanation - to make us get exactly what they're trying to achieve with the Dante makeover. It takes all of three hours with the opening section of the game to make us realise how much hands-on Capcom's had with the combat mechanics. How much it stays true to the fighting excess that defines the Devil May Cry series.

For the Cambridge-based studio, its re-imagined Dante with a western rather the eastern influence. That means James Dean by way of punk rock culture. Rebel with Cool. Fight Club's Tyler Durden with more arrogant cockiness. The cinematic inspiration is something the team circle back round to. Coolness that's contemporary, right for the times. The game's backstory told through graffiti art rather than biblical interpretation.

Watching cutscenes and playing the first five missions, its clear this is a different character from the one seen in trailers and clips so far. Creative Director Tameem Antoniades agrees during a post-play chat, acknowledging short, punchy teasers are unable to capture all sides of the personality.

So the swearing match between Dante and the succubus seen at the Gamescom demo is one of the rare times the new guy drops the f-bomb. For the most, he's a more serious take on the character, intense but quiet, laid back. Cocky, sure, but not aggressively so.

Much like 343's done with Master Chief in Halo 4, Ninja Theory's worked in some impressive cut-scenes that dig into Dante's psyche without alienating the core of the character. Fantastic mo-cap performances and scripting making these a real joy to watch. Vergil, Dante's brother (who he's meeting for the first time again) is particularly fun, a warm yet reserved performance, that has you waiting with baited breath for the eventual fallout you know is coming.

But the studio remembers to add lashings of the ludicrous action stylings that come with the territory. Witness Dante dressing in a slow-mo ballet as he dives through his trailer home - as it's being tossed at him like a projectile. From bollock-naked in one side and out the other, dressed and ready for a scrap. A strategically-placed pizza slice mid-flight raises a laugh.

Surprisingly, the game wastes little time in unlocking your full repertoire of moves and weapons. Your sword Rebellion's soon able to transform into the demon axe Arbiter, or the angelic scythe Osiris, and we're soon roundhousing enemies with the flaming Eryx gauntlets. Twin pistols Ebony & Ivory again fall to the bottom end of the weapon food chain - but everything's got extensive upgrades to form combat chains, and even they get to flaunt their worth mid-battle.

The combat system was the biggest worry in this project, but you can see Capcom's hand-prints all over it. DMC producer Motohide Eshiro explains there was a big push internally from the franchise creators to make sure was on par with previous iterations and satisfied.

And it's satisfying all right. Sharp, precise. It feels more visceral than Devil May Cry 4, if not reaching the twitch-mentality of DMC3.

Cancels are on the table. Performing last-second dodges grants you increased attack damage. Air dashes let you zip between groups. Osiris has spinning attacks that can hammer enemy groups of juggle foes in mid-air, while Arbiter has air-to-ground pounds that bounce enemies. Both have chain grabs that can pull foes towards you, or you to them.

And this is all before you start unlocking new moves, each weapon's potential attack list hitting the double figures. If you don't like what you've bought, you can simply refit Dante's upgrades as you see fit from the menu.

In these opening hours there's simple enjoyment discovering the variations on attack chains, mentally filing away combos like a martial arts montage for later use.

Weapon abilities tie into colour-coded enemy types, leading to you constantly switch between your arsenal. Scythe and axe are equipped with the relevant button held down, while Eryx is mapped to the D-Pad. There's also hidden areas littered throughout each level, secret missions and collectable-filled dead ends that require specific weapons to open. These are prevalent even before you've got the goods to gain access, suggesting Ninja Theory are equipping with the expectation of multiple run throughs.

While Ninja Theory's previous work Enslaved offered simplistic, brutish combat that fitted well with the character of Monkey, but offered only a small stockpile of easily handled foes, in DMC you very quickly need not to be putting a foot wrong. It's heady stuff. There's multiple difficulties to be unlocked too.

As for the locations, and the reasons Dante does what he does, Tameem tells a great story about an ancient gameplay mechanic that evolved into a integral part of DMC's design and narrative. The walls that appeared during enemy encounters in the original Devil May Cry have been explained away as the city itself reaching out to impede or kill Dante.

Tameem runs a inspiration montage, Inception-like buildings fracturing, viruses growing, to showcase how they'd envisioned a living city reacting to a foreign agent. On discovery, Dante's pulled into Limbo, a co-existing gross, demonised version of the human world, and has to fight his way out to escape.

The dual identity plays into the story, as Dante fights to liberate the city's inhabitants from a demon overlord: less fire and brimstone, more spiked soda drinks and 24/7 agenda-filled news networks.

It's a linear story that's clearly going to finish as anything but. We're cued in by way of the franchise's history, but we're in the dark as to how Ninja Theory will envision it, but eager to see how. Who'd have thought we'd be praising a DMC game for intriguing us with the narrative?

If there's an uncertainty right now, its with the extensive platforming we see from the off. Axe and scythe chain grabs also operate in yanking platforms free and pulling us towards glowing targets.

Needing to interchanging Arbiter and Osiris mid-jumps is fine, but there's the odd time when the window for a successful lock-on, entirely automatic, is simply too narrow. It's less a difficulty lesson, more a question if the targeting's up to scratch.

But that's the only main negative thus far. With a good story, and a robust fighting system, DMC seems to take the best from the past and add it the new, and give the series a credible future. Both companies have sold us on this being a marriage with solid foundations. We no longer await the forthcoming nuptials with scepticism, but with relish. 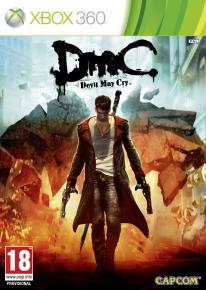