Finally, Square Enix lifted the curtain. The new Eidos-Montreal game is Marvel's Guardians of the Galaxy, a single-player, action-adventure, story-driven game that we were able to see in-depth in a digital presentation prior to E3. In our preview we told you everything we saw and how much this game promises, but we also had the chance to learn more about the choices system that this game explores.

Will we see different endings based on what we choose? Will there be an affinity system between characters that determines their behaviour in combat? According to Eidos-Montreal: "While we decided to have the same main story arc for every player, the choices you make have a variety of impacts. Sometimes, it is more cosmetic like emotional reactions to banter choices, etc. Sometimes it affects the gameplay directly like what was shown in the reveal trailer when we choose to throw Rocket on the other side of the chasm. If not thrown, players need to find another solution to pass over the chasm."

Despite this, there are parts of the storyline that change based on what we choose: "Sometimes, choices will affect bigger narrative/gameplay events - as you see in the gameplay trailer you have the choice to sell Rocket or Groot. This is the main focus of choices and consequences in the game."

Deciding will impact both characters and the events we live in the game. However, Eidos-Montreal did not want this component to generate some kind of progression determined by the affinities between characters: "We deliberately didn't go in a direction where you have to manage the relationships with the characters because we didn't want to slow down the adventure with too much micro-management."

Marvel's Guardians of the Galaxy is releasing on October 26th on PC, as well as PS4, PS5, Xbox One and Xbox Series X|S.

Guardians of the Galaxy has twice the dialogue of Deus Ex

The game made for one of the most exciting reveals during this year's E3.

Eidos-Montreal confirms to Gamereactor that there will be around 40 skins in the game, plus collectibles and lots of photos.

How much does decision making influence Guardians of the Galaxy?

Eidos-Montreal stresses the weight of each decision in the game and rules out an affinity system. All players will see the same ending. 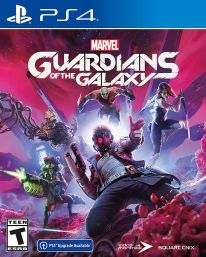