Take to the streets of Tokyo

Who's this Akiyama fellow?

The faces of Yakuza 4

Can you spot any pimples? 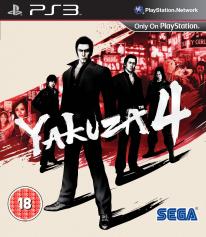