The Trine series has quietly built up from humble indie origins to become an established series, and the signature three-player co-op that Trine is known for is set to return once again when Trine 4: The Nightmare Prince lands on PC, PS4, Switch, and Xbox One this autumn.

We actually had an inkling about this one before it was announced after the game's existence was uncovered ahead of time, but now Frozenbyte and publishing partner Modus Games have fully unveiled the next entry in the fantasy series, as well as confirming a bunch of features (including, for the first time, four-player co-op).

Channelling the spirit of past games, in particular the first two, Trine 4: The Nightmare Prince has the trio of Amadeus, Pontius, and Zoya reunite for a princely fetch quest that turns out to be a little bit more complicated than initially thought. The fourth game in the series will include co-op for up to four players, both locally and online, and the whole thing will include a revamped combat system.

Modus also confirmed that at the same time it will release Trine: Ultimate Collection, a bundle that includes the new game as well as Trine: Enchanted Edition, Trine 2: Complete Story, Trine 3: The Artifacts of Power, and a few additional goodies (a soundtrack, some digital art, that sort of stuff). 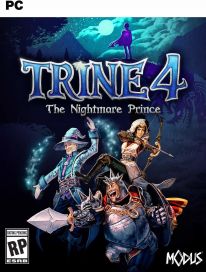