It has been revealed by developer Playful that both Super Lucky's Tale and New Super Lucky's Tale have been picked up by 3 million players. For a relatively small indie project, this is an admirable milestone to reach, but it's unclear what is meant by the word players. Does this include those who have tried the game on Xbox Games Pass, or is it simply just those who have bought the games? That isn't exactly the clearest.

The developer also revealed that New Super Lucky's Tale has now been released physically on PS4, Xbox One, and Xbox Series X.

Originally released as a launch title for the Xbox One X, Super Lucky's Tale is an adorable platformer that shifts between both a 2D and 3D perspective. Although it was originally exclusive to the PC and Xbox One, the title eventually made its way over to the PS4 and Switch within an enhanced version, simply called New Super Lucky's Tale.

You can read our review of New Super Lucky's Tale here.

"Playful's game offers some of the best platforming outside of first-party titles on the Switch full stop."

The delightful platformer has also been released physically for PlayStation 4, Xbox One, and Xbox Series X.

New Super Lucky's Tale announced for PS4 and Xbox One

Lucky is getting a new lease of life on the Nintendo Switch this November, updating the original game.

A new version of the Xbox platformer is making its way to Nintendo Switch. 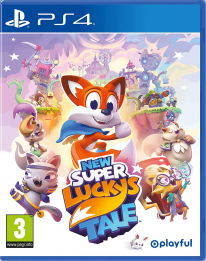