If a game starts with the words 'New' and 'Super' on the Nintendo Switch, the safe money would be on it being a Mario title, but Playful Entertainment has actually applied the same formula to their re-release of Super Lucky's Tale. The vibrant and cutesy 3D platformer first released in 2017 for PC and Xbox One, although this new edition for Nintendo Switch is more than just your regular port.

That's because a lot of the content has been altered this time around, although not in the same way as a lot of other Switch re-releases. This isn't some complete edition that packs all added content since release into one bundle, but instead, the studio has changed almost every element of the game. Levels have been redesigned, hub worlds altered, and Playful hasn't been afraid to take a sledgehammer to all aspects of Lucky's Tale, both great and small.

This is all evident in the trailer below, where the old and new are compared alongside each other. Even the very first level you dive into has been rearranged in major ways, along with the encounters with Master Mittens, boss fights, and even the small details like the way you pick up Clovers.

On top of that, there are changes to the presentation on top of the tweaks to the actual content. The lighting, for example, is dramatically improved, making the world shine and sparkle, with the colours popping a lot more now. The way Lucky himself moves has also been tweaked, making it more natural and even a bit Mario-esque, with the big boots and arms swinging by his sides like Mario Odyssey or 64.

Considering Mario's own prevalence on Nintendo consoles, this platform seems like a perfect fit for Lucky, joining the likes of The Legend of Zelda, Yooka-Laylee, Spyro, and Crash as icons of 3D platforming. It's great to be able to play this improved adventure at all, but it's even better having the choice to take it with you on the go as well as play it docked from the comfort of your sofa.

In fact, we'd argue that Playful's game offers some of the best platforming outside of first-party titles on the Switch full stop. The worlds are varied and imaginative, the platforming is simple but fun for all the family, and there's a quirky cast of characters to keep you company throughout the whole thing.

Due to its family-friendly focus, it may be a tad easy for some people, even when you're collecting 100% of the extra items as a completionist, which also means that those skilled in the genre will find everything flies by rather quickly. That said, there's plenty of content to dive into, including extras like cosmetic items and hidden areas in the levels waiting to be found.

It's also worth noting that we found Lucky's movement to be a little imprecise at times, especially when turning tight angles. This could prove a little frustrating in the later levels, but for the most part, it wasn't too big of an issue, just a little something that could make a difference if you're choosing between several quality platformers to invest in.

In an era of tough competition in the 3D platformer space, New Super Lucky's Tale manages to stand out with this reinvigorated version of the 2017 adventure. There's new content aplenty and a fresh layer of polish, meaning this is arguably the best way to experience Playful's game. It's still fun, it's still colourful, and all the family can enjoy it, which is the sign of any good platformer.

Advertisements
Gamereactor UK
+
Improvements make the whole package better, Lighting and visuals look good, Great to play on the go or at home, Still fun for all ages.
-
A touch easy at times, Lucky's movement can be imprecise.
is our network score. What's yours? The network score is the average of every country's score

"Playful's game offers some of the best platforming outside of first-party titles on the Switch full stop."

New Super Lucky's Tale announced for PS4 and Xbox One

Lucky is getting a new lease of life on the Nintendo Switch this November, updating the original game.

A new version of the Xbox platformer is making its way to Nintendo Switch. 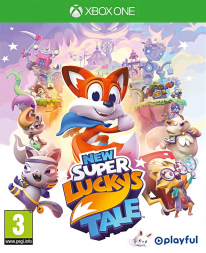