Warner Bros have announced that critically acclaimed platform/puzzler Scribblenauts has sold in excess of one million copies worldwide. An impressive number on a platform where third parties are struggling to find success with quality titles. No sequel to Scribblenauts has been officially announced yet, but rumours point to a Nintendo DS, PC and Wii release later this year.

Scribblenauts is finally here and Bengt has been busy scribbling away just about anywhere...

How vulgar can you get?

Cthulhu and pandas on unicycles 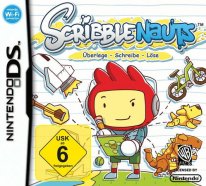