After remaining stagnant for over a decade the Samurai Shodown series has found its second wind in the form of an unexpected reboot. Rooted in the Tenmei era of Japan, it's a gorgeous brawler that demands careful strategy and the main difference when compared to its competitors is that here you fight with an assortment of razor-sharp weaponry instead of with your fists. The shiny new reboot features three new playable characters, special moves, and an all-new dojo where you can battle AI 'ghosts' created using player data.

We spent several sessions in the training dojo before we really got into the rhythm of blocking, reading, and countering attacks. It's a tricky dance to master especially when the most tempting thing to do is to spam the most powerful attack and hope for the best. Your three main attacks are light, medium, and heavy and much of the challenge comes from knowing when to use the right attack. Heavy blows have the potential to strip away a hefty chunk of health but can leave you vulnerable if correctly countered, and the other attacks present safer alternatives but may not be what you need for a rapid takedown.

The blazing bar at the bottom of the screen is known as the 'rage gauge' and this can be wielded as a powerful comeback tool. If you've been turned into an opponent's punching bag the meter will start to raise and once filled can be triggered for a temporary boost to your attack and defence. When in this momentary rage state you can also activate a special attack (similar to a final smash move from Super Smash Bros.) to shred your foe's health bar in two. One thing to note though is that you can only activate the rage gauge once per battle so you need to be mindful of using it at just the right moment.

It may sound clichéd, but often defence is your best attack in battle. A perfectly timed dodge can increase your rage gauge without even taking damage and you can even disarm your foes if you counter an attack at precisely the right moment. Disarming your opponent will leave them scrambling across the arena in search of their weapon allowing you to punish them with an attack or two while they are distracted. That's without mentioning the obvious fact that you will sustain much less damage and will have more room for occasional slip up when trying to land a few attacks yourself.

Fans returning to the reboot will surely find some familiar faces here as 13 of 16 characters have returned from previous iterations. The hulking man-mountain Earthquake is here along with other originals such as Galford and his canine companion, Poppy. Three might not be many newcomers but fortunately, each of the characters feels distinct, each one with their own personality and bespoke weaponry. Our favourite is perhaps the painfully clumsy Wu-Ruixiang who can summon a fire-breathing dragon and clobbers her foes to death with a bronze shield. We should also mention that this roster is set to grow over time, with Season 1 planned to roll around this August (it's also free if you purchase or pre-order before 30th June).

Along with an arcade-like story mode crafted for each character, Samurai Shodown also features a handful of other modes for players to sink their teeth into. There's Time Trial, Gauntlet, Versus, and Survival modes for offline play as well as a series of handy training tutorials. For those looking to take the fight online, there's casual and ranked matches along with the aforementioned dojo that allows you to take on ghosts built using player data. Sadly at the time of writing, we were unable to access the main online mode but from what we experienced in the dojo, we weren't particularly impressed with the implementation of this feature. We thought that ghosts didn't respond to us in the same manner as an actual player would and instead often just jumped up and down in one corner. We are hoping that this is something the devs can look at more closely.

Another complaint we had was that many of the battle modes just boiled down to the same repetitive structure of fighting waves of enemies with the odd subtle twist thrown in for good measure. Time Trial only slightly mixed things up by adding a timer and Gauntlet only differs from Survival in the sense that you fight through the main cast and not endless opponents. We ended up craving something a little different such as a challenge mode where we had to fight with nothing but our fists against armed opponents. However, we imagine that the Versus mode, both online and offline, will be where players will sink most of their time and we can see this offering countless hours of replayability due to the polished combat system.

The presentation here is just glorious with a cartoonish aesthetic that remains faithful to the 1993 original. Everything here just pops and is wrapped up in a vivid spectrum of colours making for one of the best-looking brawlers we have played, and this quality we are pleased to say is extended to the design of the battle arenas themselves. One of the stages saw us fight in an autumn forest cloaked in golden leaves with woodland critters such as bears and wolves taking centre view. Another saw us duel outside of an ancient Japanese temple surrounded by rolling hills and trees shedding cherry blossoms.

Samurai Shodown sees the classic fighter return in good form and it brings its unique brand of consequence-heavy swordplay back for a new generation of fighting fans. This reboot sports some of the most effective visuals we have seen from the genre to date and we found each of the new additions to its ensemble of characters to be memorable. We did, however, think that some of the single-player modes blurred into one after a while and the online dojo didn't handle player combat data as expected. This is still a great foundation that SNK has laid out and we only expect things to improve with the arrival of season pass content and upcoming patches.

Advertisements
Gamereactor UK
+
Good new additions to the roster, looks great, engaging tactical combat.
-
Ghost AI is erratic, the solo modes pretty much blur into one.
is our network score. What's yours? The network score is the average of every country's score 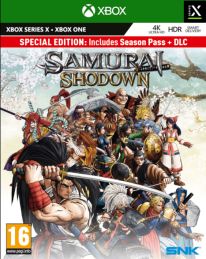