Harmonix, MTV Games and EA have announced Rock Band Unplugged for PSP. The game won't come with any peripherals as your hands will simply act as instruments. The game is in development at Backbone Entertainment under supervision of Harmonix.

Rock Band Unplugged will feature 40 master recordings, including nine (see below) that will remain exclusive on PSP for some time before becoming available as downloadable content for other versions. 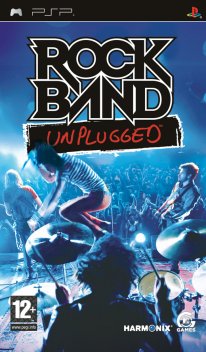