It's common knowledge (and regurgitated in many articles discussing Zelda's impact on the world) that comedian Robin Williams named his daughter after Nintendo's Princess.

So to mark the launch of Ocarina of Time's 3DS release, who better to get for a TV commercial?

Celebrity appearances in Nintendo TV ads are nothing new - Helen Mirren and Patrick Stewart having graced our screens with Wii Remote or DS in hand - but Williams and his daughter showing up at least has some genuine relevance to the subject matter.

Even if the commercial isn't great (we're preferring the one with gameplay footage plus stellar quotes) it's a nice nod to the legacy of the franchise (and a chance to check out Robin's epic beard). Check it for yourself here. 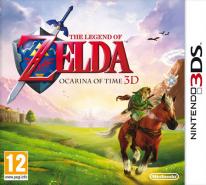