GRTV caught up with Tomasz Gop, the executive producer working on the action-RPG, Lords of the Fallen.

During the interview Gop explained why the word 'action' is being used in conjunction with RPG when it comes to describing Lords of the Fallen: "You craft your own skill, that's the basic of the game," he explained. "That's at least the way I perceive adding ‘action' in front of an RPG. There is a story, there is a hero, there are quests, you drive through that. But action means that the biggest part of the game is combat, you have to craft the skill."

"As somebody once said there is a large difference between games that allow you to finish them without learning the basics of their system, and games like Lords of the Fallen, where you have to do your homework to finish the game. That's why action RPG means let's get some action, let's learn the moves, and let's capitalise on that."

Gop also explained the reasoning behind the decision to launch on next-gen consoles, and what they hope to achieve by this move: "We also hope to be some sort of a trendsetter for hardcore triple-A RPGs on these platforms. So we're ambitious types, we're trying to do it that way. But also there is obviously an element of the hardware, a lot of things that we can easily do with wider landscapes, nice looking effects."

There's no open world in the game, but Gop insists that doesn't mean it's going to be overly linear. "We're huge fans of exploration in terms of revealing stuff, finding secrets. Secrets are going to be huge in Lords of the Fallen."

"The way we wanted to stage it is that there are going to be chapters in Lords of the Fallen, but re-exploration of places you've already been to is highly recommended and we encourage players to do that," Gop continued. "We always try to put something that is new once you've re-explored a place. So it's not an open world game, but it's not a very linear game. It's not like there is only one way to go throughout the stages of the game and never coming back... Although we have divided the game experience into - let's think of it as chapters."

CI Games' action-RPG is set to launch on PC, Xbox One and Playstation 4 sometime in 2014.

"Deck 13 and CI Games has put together the first really challenging game for the new consoles. We've been dying a lot in Lords of the Fallen..."

Lord of the Fallen's DLC will encourage exploration

Expansion will take place between realms, will feature new enemies and a labyrinth.

Livestream Replay - Lords of the Fallen

Our own Dóri dies countless times in just the opening section of Deck 13 and CI Games' action-RPG.

Today on Gamereactor Live: Lords of the Fallen

We take a stab at what's being called "the most difficult game of the new generation so far"...

Lords of the Fallen "the first really challenging new-gen game"

We talk to Lords of the Fallen's executive producer Tomasz Gop about the demonic realm, new-gen effects, challenging players and more.

To get the full experience you'll have to dig deeper. 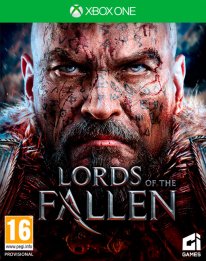