Google was first out the gate with the announcement of which games will come for free as part of the subscription plan, Stadia Pro, in the month of July (it's a similar service to PS Plus and Xbox Live Gold that offers a number of titles for you to claim each month, and after that, they'll be yours for as long as you have a subscription).

Even if Stadia has been lacking in some areas, we really can't complain about the Stadia Pro games, which have often been more tempting than what Microsoft and Sony have had to offer. With that being said, July probably isn't their most AAA selection yet, although the quality is definitely there. In addition to the games already available on the service, here are the next titles that you can claim, starting July 1:

We'll get back with similar updates on PlayStation Plus and Xbox Live Gold once their free titles have been revealed. What do you think of Stadia Pro's offerings this month?

"The team knew how to imitate the old style formula, but they added some small touches of their own to further the Monster World formula."

Here are your four Stadia Pro games for July

Google reveals the next round of games included in the Pro subscription.

Last month it was teased that Monster Boy and the Cursed Kingdom would receive Switch Lite-specific content. Now FDG Entertainment has revealed on Twitter that Patch 1....

Is Monster Boy and the Cursed Kingdom getting Switch Lite-exclusive content or features?

Monster Boy and the Cursed Kingdom PC release due for July

The successful series return will finally be coming to PC after already launching on consoles last year.

Get a free taste of the latest Monster World title from Game Atelier and FDG Entertainment.

Monster Boy on Switch is "another universe" in terms of sales

FDG Entertainment says the Switch version is outselling the others combined 8:1 as Nintendo's console continues to do well for indies. 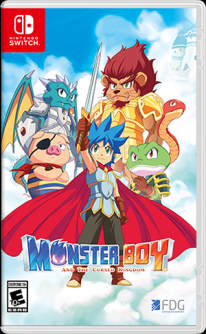