There are still new games being released in 2019, and one of the bigger remaining titles is the action-RPG Darksiders Genesis. And thanks to Escapist Magazine, we now know that it will take roughly 15 hours to play through this promising top-down adventure.

This was revealed by Ryan Stefanelli, Darksiders producer and also president of the developer Airship Syndicate. He also had the following to say regarding this project, that really offers something different from the regular Darksiders games:

"It's a very arcadey Darksiders experience. When we were thinking about how we want to approach what we show the players versus what we tell the player, we thought it would make it a more interesting experience to tell the players exactly what they failed to acquire so they know, 'I have to go back and find this chest and some Boatman Coins and I'm missing an ammo type.'"

Darksiders Genesis has 11 stages to enjoy, and according to the Steve Madureira, design director at Airship Syndicate, they are very replayable and the developers have tried to encourage exploration in this more arcadey game in the series:

"We reward exploration. A lot of things are hidden throughout. Secrets, puzzles. The structure of the game is mission-based, so you can replay a mission and look for the stuff you missed the first time."

If this sounds interesting, mark December 5 in your calendar as that's when Darksiders Genesis launches for both PC and Google Stadia on December 5 with a console release following on February 14.

The minimum and recommended specifications have landed ahead of its release date in December.

These change the way you play the game, and there are several abilities to utilise as both Horsemen as well.

THQ Nordic recently announced the dates on which you can join Strife and Malgros' in battle. 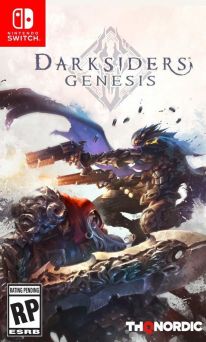