We're just a few weeks away from Darksiders Genesis' launch for PC and Google Stadia on December 5 (consoles are getting it on February 14 next year), and now a brand new trailer has been released by Airship Syndicate, showing off the Creature Core system and abilities in the game.

Both Horsemen in the game get a variety of different attacks to begin with, but more Creature Cores can be picked up after defeating enemies and bosses. They can also be bought at Vulgrim's store for souls, adding extra alterations to your character, like a lava trail for dashes and a chance to spawn a hellhound when you attack.

You can see a ton of abilities in the trailer below, showing the devastation you can cause in this new take on the Darksiders franchise, and not long ago War received his own gameplay video for Darksiders Genesis, showing how he can handle himself in battle.

Are you a fan of the Creature Cores concept?

The minimum and recommended specifications have landed ahead of its release date in December.

These change the way you play the game, and there are several abilities to utilise as both Horsemen as well.

THQ Nordic recently announced the dates on which you can join Strife and Malgros' in battle. 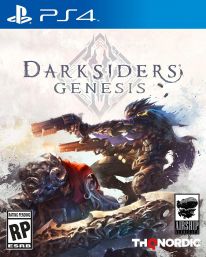