As expected Blizzard announced the next expansion of World of Warcraft - Cataclysm - at Blizzcon this weekend. The expansion includes new areas, two new playable races and a raised level cap (85).

"In addition to revitalizing some of the most familiar and iconic areas of the game world, this third World of Warcraft expansion will add new features and a large amount of new content for players to explore," said Mike Morhaime, CEO and cofounder of Blizzard Entertainment. "We're excited to be offering a first glimpse of Cataclysm for attendees of BlizzCon, and we look forward to sharing more information with everyone as development progresses."

Here is a short excerpt from the press release that sets the stage for Cataclysm:

"In Cataclysm, players will witness the face of Azeroth being altered forever, as the corrupted Dragon Aspect Deathwing awakens from his subterranean slumber and erupts onto the surface, leaving ruin and destruction in his wake. As the Horde and Alliance race to the epicenter of the cataclysm, the kingdoms of Azeroth will witness seismic shifts in power, the kindling of a war of the elements, and the emergence of unlikely heroes who will rise up to protect their scarred and broken world from utter devastation."

The expansion will also change the current content and allow you to rediscover Azeroth. No firm release date has been given (it's Blizzard), but Cataclysm is expected sometime next year.

REVIEW. Written by Mikael Sundberg (Gamereactor Sweden) on the 7th of December 2010 at 15

Blizzard have burned their Azeroth to the ground, only to build a new world from the ashes. Mikael Sundberg has said farewell to the old, but welcomes all the new.

The new additions to Warcraft are discussed as GRTV is joined by by game director Tom Chilton and art director Chris Robinson. All you need to know about 4.3 is right here.

Sub numbers down since last year

Blizzcon tickets available in May

For at least one hour, tops 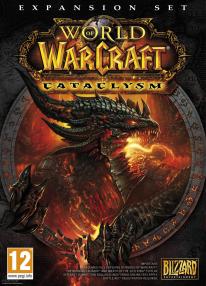