It's no Pokémon. No Monster Hunter either. No Fire Emblem, nor a classic Final Fantasy or Dragon Quest remake. Bravely Default, Square Enix's latest original RPG for the Nintendo 3DS, is publisher's latest 'million seller', and a very meaningful success story for the company.

40% of that first million shipped worldwide (both retail and download) comes from game's home market, while the remaining 60% has been sold elsewhere, including Europe. Siliconera breaks down the numbers and recalls the importance of the new franchise for Square Enix's Japanese division, for it shows interesting J-RPG market possibilities.

But the publisher didn't wait for this milestone to quickly move and start developing Bravely Second, the game's sequel for the same platform, announced at the end of last year. Nor have they've taken this opportunity to share new details on its development, though.

Lastly, it's worth noting that, despite not being a monster catching-hunting phenomenon or an already established J-RPG brand, Bravely Default took some good advantage of Nintendo's marketing and distribution support overseas. Still, encouraging news for fans of the genre. 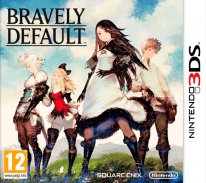