Starting today, you can participate in a series of marathons lasting up until August 13, with the ultimate prize being an in-game version of Iron Maiden's Spitfire. The metal band uses a replica of a Supermarine Spitfire Mk Vb IM, a British Tier VI Fighter, as a set prop for their latest tour, and you can now unlock an identical plane in World of Warplanes, with the band's mascot, Eddie, in the cockpit.

This is only part of the Iron Maiden and World of Warplanes partnership, as lead singer Bruce Dickinson has been releasing a series of videos presenting classic warplanes. That series will come to an end this month, but you can check out all of the episodes on Youtube.

"The new update is without a doubt the right occasion to start playing again."

"With time they'll naturally add more planes, upgrades and game modes, but sadly the latter category is rather lacking at this point."

You can get Iron Maiden's Spitfire in World of Warplanes

Unlock the plane in-game complete with infamous "Eddie" in the cockpit.

Who better to make an educational video than the metal icon?

World of Warplanes updates to 2.0

World of Warplanes flies out of beta

Full release of Wargaming's next MMO. 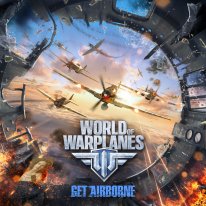