It's hard to know what there's more of: sword swipes or swearing.

Control of Yaiba - think Capcom's Bionic Commando with a ninja-bloodlust and a Tarantino vocabulary - is all about quick dashes and combos that dance between the core slash, punch and flail buttons. There's blocks, grabs. Bloody finishers.

This Z variant of the Ninja Gaiden franchise fills the cracks between smaller groups of tougher enemies with shambling undead hordes that are, for the main, combo practice. The flail move in particular - letting you pull off a roundhouse strike - chops into the closest waves of the surrounding crowds. The multiplier score is big and bold on the screen, and easily hits double figures.

The rare moments not carving rotting flesh with swords are spent platform hopping between different areas. Signposted grapple areas and arrowed vertical dashes point out the path to the next locale to begin your slaughter again. It's simple stuff that gives your hands respite, and allows the developer to dabble excessively in twisting camera angles and cinematic set-pieces that explode around you; the game's opener a charge through a fireball of a skyscraper that's gradually collapsing around you.

Between all this, you get the odd comedic introduction of new zombie classes, and there's even the odd environmental puzzle tossed in. A stack of upgrades to unlock, and zombie weapons to steal off the undead (not exactly grave-robbing if they're moving) to use short-term (particular favourite: the rainbow nun-chucks, which spurt out colourful flares when in use).

So Spark's taken a good stab at what makes Ninja Gaiden tick, and tacked on an overlay that fits the mood of the game. That frustrating combat difficulty is still there - we're only an hour or so into the game, but already a rooftop clash with multiple zombie heavyweights lays us low repeatedly as our finger muscles prove not up to par - which is both series' curse and calling card.

But it's not that which causes us to turn the air blue. By Ninja Gaiden standards being stomped and having ribs crushed by a swarming horde of heavies is the franchise's version of a fair fight. We find ourselves - and by looking round the room at other player screens, we're not alone - stuck in a rut at times due to poor camera angles, an inability to distinguishing Yaiba from the attacking crowds and choppy block mechanics.

A great example of all three is the rooftop battle early on. Waves of zombies are sent at you whilst attack choppers pepper you with gunfire and missiles. The camera stays mostly static, but we find ourselves, in backing up to clear some space on the ground, disappearing in a corner off-screen.

Maybe. Because we completely loose track of Yaiba. He may be off-screen. He may be in the middle of that heaving mass of bodies. Where he's not is in front of our eyes. The comic-book visuals while colourful are marred by darker tones, and there's near-zero distinguishing marks between horde and cyborg ninja-killer. If ever a game needed a Sim-like crystal above their head...

At this point we're also supposed to break from zombie killing to reverse a missile strike, timed blocks allowing reversals of phallic death bombs back into the maws of the choppers. But we can't see Yaiba to know when to time the button press, and even if we do spot the swordsman, we're hard-pressed to free up some space to avoid a zombie bite while trying to deflect a bombardment.

It's less of an issue in the smaller, tighter areas that are to come, when the camera pulls in and the game favours us with a smaller number of tougher enemies. Yaiba's dash - effectively an unlimited and instantianous teleport a few feet from where we stand - never fails in landing us where we want to be.

In these moments we can concentrate on the combat mathematics needed to tackle different sets of enemies. The sets are constantly being added to and recombined: one clown matched with zombie grenadiers, then heavies matched with one clown, a teleporting bride with scores of zombies... such is the speed of the gameplay, the time needed to work out the right order and moves to walk out the other end of the fight is measured in seconds.

Those involved in the game's creation know their audience. Garbed differently as it is, at the core Yaiba requires the same skill taught in previous Ninja Gaiden games. There's even a nod to the original with a side-scrolling sub-mode with leaderboard support and pixelated cut-scenes progressing the story.

Shame then that the initial difficulty spike makes for a less than smooth introduction to the game. There's enough issues at hand to make us worry about that looming release date - the game's out in two months, and this feels like a project still needing some polish.

Ninja Gaiden games may leave our hands bruised and our frustrations boiling, but there's always a degree of respect over the hardcore nature of their gameplay. Precision and clarity are still elements Yaiba is searching for. Here's hoping the game finds them.

"At its best, it's low-brow gory fun, but in comparison to some of the great games releasing at the moment, it's definitely one of the poorer titles of 2014."

But his only regret is calling it a Ninja Gaiden title.

New screens for Yaiba slash their way in

Ninja Gaiden Z gets some fresh images ahead of launch this month.

Collaboration due out in March.

PREVIEW. Written by Gillen McAllister on the 12th of December 2013 at 14 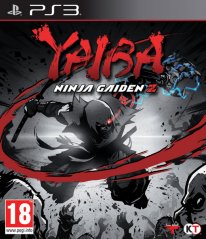