SteamWorld Dig takes place in a 19th century setting, steampunk meets the Wild West, but humans have been forced to live under ground. As Rusty you're objective is to mine for riches and keep a community alive when an ancient evil awakens deep under the surface.

We had the chance to ask Image & Form founder Brjann Sigurgeirsson a few questions:

Can you tell us briefly about the history of Image & Form?

"I started Image & Form 1997, and had a very vague idea to someday get involved with game development - but back then it was mostly web and design. Hence the non-cool and perhaps even crappy name Image & Form.

Today we are a game studio in beautiful, breezy Gothenburg consisting of eleven childlike creative people. We did a whole bunch of kids games for Mac and PC between 2004 and 2010, when we switched over to iOS development. 2011, we had a big hit with the real-time strategy game Anthill for iPhone and iPad - it was among other things the iPad Game of the Week - and now we're looking towards the Nintendo 3DS. The platform is growing and its audience is made up of real gamers. That is it's not where our moms play casual games for free."

What are your sources of inspiration for SteamWorld Dig?

"SteamWorld Dig is a stand-alone game in our SteamWorld Series, and it's about digging tunnels, collecting and selling rare minerals in order to obtain better equipment, while taking on the nasty and fantastic surprises of the underworld. The first game, SteamWorld Tower Defense, released for the Nintendo DS in 2011 and received good reviews, but we felt we only scratched the surface. The main inspiration was therefore to develop the history of SteamWorld, an alternate future where time has stood still since the late 1800s, where people already had managed to blow themselves to pieces and benevolent robots govern what is left. Since SteamWorld Dig has evolved into a fantastic and unique game in itself.

SteamWorld is thus a world of steam-powered robots, and it is the main idea - it's not really tied to a genre. The series will hopefully come to include many types of games where the benevolent robots fight the bad humans.

Other than that, we are inspired all the time by many different games. If we are to discuss the genre, Dig Dug was one of the first arcade games I played, and I remember that I thought it was awesome. SteamWorld Dig actually has quite few similarities to Minecraft in the game mechanics, but that is also a source of inspiration."

Do you have any tips for someone who wants to become a game developer?

"Study! And study hard! It does not matter if you sit at home and learn or attend an education, but work really hard at what you do. Also, try to think of unique ideas - the world is full of me-too products, and it is much more fun to think of something entirely new. Think through and design the game in its entirety before you start production. And take any help from people everywhere, whether it be friends that can draw, or program, or people who can test and provide feedback."

What are you most pleased about with the game and what do you get it to stand out from the crowd?

"It is business as usual with our games - I am most pleased with the high quality of everything. As in all Image & Form games, the graphics are wonderful and the gameplay is awesome. It's extremely addictive, and the story is well-developed. You can say that SteamWorld Dig is a kind of Unforgiven for robots. And it's a unique game: you dig out the playing field, and the story develops while you're at it. If you succeed, the small mining village up on the surface will flourish. If not, then ...

We've dug something up on the Nintendo 3DS eShop. Turns out it's a diamond in the rough!

The folks at Image & Form have tunnelled their way backwards.

SteamWorld Dig free on Origin for a limited time

Ahead of the sequel releasing later this month.

SteamWorld Dig heading to Xbox One

After hitting Nintendo 3DS, Steam, PS4 and PS Vita... what does that say about Microsoft's parity clause?

SteamWorld Dig burrows onto the Wii U

After 3DS, PC, PS4 and Vita releases it's finally time for Wii U.

Platformer/digger due out in March. 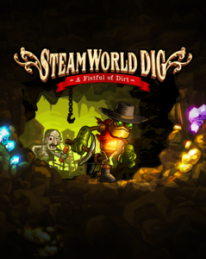