One of the titles cut by Activision Blizzard as a result of the merger this summer was Wet from Canadian developer A2M. The game that resembles Midway's Stranglehold, but with a twist of a Tarantino-esque heroine named Ruby instead of John Woo's Tequila. While several of the cut games, such as The Chronicles of Riddick: Assault on Dark Athena, Ghostbusters, 50 Cent: Blood on the Sand and developers such as Massive Entertainment and Swordfish Studios have found new homes, it has been very quiet when it comes to Wet.

However recently a new video appeared on Youtube from a presentation A2M held at the Montreal International Games Summit (18-19 November), which at least provides us with evidence that the title is still alive. It remains to be seen it A2M can find a new publisher for Wet.

Below is an interview with the developer from Games Convention 2007 where the game was last shown to the press prior to MIGS. 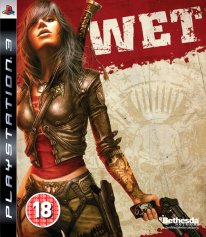