Best way of judging the improvements made to tennis games these days? You won't find it on the court action. Take your eyes off that Pro and instead gaze at the crowd.

While we've been watching the virtua characters moulded ever closer to their real-world counterparts over the years, the faceless runts on the sidelines have been getting a raw deal. Only now with Top Spin 4 and the newest Virtua Tennis title, once more being developed by the original AM3 team, are we seeing a vibrant audience of individuals rather than a overflowing pool of identical faces with three different shirts between 'em.

Based on that alone, Top Spin 4 is edging ahead of Sega's efforts.

And it's not the only place that 2K's sim is scoring big. What seems such a small detail is in fact extremely important. There's very little manoeuvring room in the sports genre now, and only so much you can do with a tennis court and two to four competitors. So the smaller changes weigh heavily.

After coming away from an extensive afternoon session playing all three console versions of Virtua Tennis, something seems off. It's a thought picked up by the massed journalists and picked apart in a post-game pint in the nearest drinking hole. The key word bandied about is "sluggish".

Watching and playing the game sees easy shots missed and slow reactions from on-screen players cost dearly. Sliced balls ricochet past when they should be returned. Their number are small, but its noticeable - and they're not all due to rusty skills. Annoyed grunts and furtive glances pad-wise fall throughout the afternoon.

Each iteration of any sports title has slight control changes. One, to offer even long-time players something new to learn. And secondly, you'd imagine to give the developers something to tinker with year after year. Virtua Tennis is no different and there's a definite difference than before with the correlation between button press and racquet hit.

For the first time there's a marked swing towards 2K's title, missed hits excused in part to learning its leaning towards more tactical and simulated play.

That VT's timing is slightly off is all the more pronounced because of the franchise's full-on affair with the pick up and play arcade handling. Its why we fell in love with the series in the first place.

And, control issues aside, there is a lot to love with Virtua Tennis 4. We'll get to the different console versions and their individual strengths and weaknesses in a second. Let's look at the core gameplay modes first.

Career has been given a great facelift, sprucing up the old girl with a sexy multi-branched, multi-choice world map trip that'll cause Western RPG hounds to lift their nose for an appreciative sniff.

You've four tours in all, split roughly across the main continents and each finishing with a iconic tennis tournament. Each will map out a path through the geographical locales and will thread stop-offs, such as training, mini-games, events and rest days, throughout.

Paths split and divide over the course of each tour, the forked road only offered if you've ranked high enough by that point; ranking is marked by Stars this time round, simplifying things for at-a-glance stat checks.

As expected, Virtua Tennis 4 comes equipped with an Exhibition mode for quick matches and a more linear progression up the ranks of the tennis heroes of today. AM3 has accentuated each player's preferred play style for a greater degree of variation.

But there's also a new gameplay element in practice. A on-screen bar will charge slowly over the course of the match. Once filled, a tap and hold of the Circle/B button will fire off a strong fast shot of your character's chosen speciality.

While the camera zooms in and a few seconds of slow-mo kick in, its a fanciful rather than advantageous effect: we noticed you could still move the other character and once time and camera return to normal, you were effectively returned to the split-second before the ball is hit, giving you ample time to prepare a return volley.

Along with Practice and My Look options (the latter letting you outfit your character without the need to dig into Career), Party throws you into the returning range of Mini Games, which we've been assured that all but one is brand new to the series.

They're looking to nicely twist the usual gameplay of VT4. There's the like of Bomb, which has you lobbing a ticking explosive to each other, with whoever is closest to the death-ball when it explodes losing the match, while Wall has you raising or lowering coloured barriers in the middle of the court by touching on-court switches.

Pin Crusher returns exclusively for the PS3 - and after handling the motion control options on all three machines, we can see why its reserved for Move: the controller was built with this game in mind.

Virtua Tennis 4 was originally announced as an exclusive for the PS3 and to use Move. However much extra time that version of the game has over Kinect, it certainly shows.

For the Motion Play mode, the camera is zoomed into a first person viewpoint, with only a hovering racquet to be seen on-screen. Movement of the player is automatic on all three versions, leaving you only to worry about hitting the ball. Both Wii and Move have the ability to track the rotation of your serve to add spin to the shot; this is something the controller-less Kinect lacks.

The lack of input choices really puts the depth and long-term enjoyment of the Kinect game into question - unfortunately calibration problems with the Kinect unit at the event compounded matters.

Wii MotionPlus proved to be as solid as ever. But even with the arc of the shots altered by Nintendo's new technology addition to the controller, we couldn't help feel there was little new to the experience. We've been lobbing balls on Wii Sports for years now.

So it was to PS Move we went, and were very much impressed. But note there were two extra stimuli that we acknowledge improved matters over the other two systems on show. Our time with the Wii title was on one of the dock stations you see in retail stores country-wide. The PS3 version dwarfed that by pumping out of a fricking huge Sony HDTV.

And while Kinect matched the screen size, VT4 was demoing on Sony's machine through one of the company's new 3D televisions. It offered us a level of emersion that was second to none, and with an ultra responsive Move controller in our hands, we were soon jumping from side to the side and thoroughly enjoying ourselves - so much so we'd consider buying a Move bundled copy of the game on the system if it comes out.

Slight digression for those interested in 3D comparisons: we had a more enjoyable time playing the game on an LG 3D TV, which stood beside Sony's. LG's used the 3D glasses offered in 3D-equipped cinemas, and the effect was fantastic, the new depth of field adding drastically to the experience. To our eyes, Sony's picture looked washed out in comparison.

3D aside, the facelift to the game is a welcome addition to a tennis franchise now twelve years old. Sega isn't scrimping on content here. Yet Top Spin 4 is coming out strong as well, and with both titles looking to go head to head for our wallets this spring, it'll be to the finer details that we'll look to decide a winner.

It'll only be then that we'll know if AM3's tweaks prove to be a smash hit in the long run, or if different doesn't equate to better.

"Short matches, quirky mini-games, and gameplay that focuses more on reflexes and timing than on proper tactics."

Characters and mini-games PS3 only.

Sega on their upcoming sports title

Sega's Mei Kumagai visited Copenhagen to talk to the press about Virtua Tennis 4 and we grabbed our cameras to find out more about the next installment of the series.

PREVIEW. Written by Gillen McAllister on the 8th of February 2011 at 16

And for Wii - motion galore!

How does it look with Playstation Move? 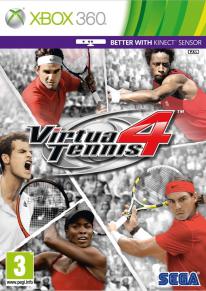