Gamereactor recently had a chat with Colin McComb, creative lead on Torment: Tides of Numenera, to learn more about the title that's being pitched as a spiritual successor to Planescape Torment and how it differs from its predecessor.

Planescape Torment was hailed by critics as one of the greatest story driven RPG's of all time and is most definitely a hard act to follow, but that is exactly what the new Torment game is intending to do. Drawing on the original as inspiration, Tides of Numenera will be set in a new universe created by Monte Cook.

"It's similar to Pillars of Eternity like Obsidian put out about a year ago" said creative lead, McComb. "It's a party-based, isometric RPG."

Although the game will adopt the classic presentation style of the original it will also differ in many ways from its classical inspiration. McComb described the new setting for the game saying "Numenera is a dying Earth style setting similar to Michael Moorcock's Dancers at the End of Time or Jack Vance's Dying Earth or Gene Wolfe's Book of the New Sun. It's essentially Earth a billion years in the future with many civilisations having risen and fallen in the time since."

McComb also discussed the focus on conversation in the game, as opposed to the more combat driven affair of the original and how this has helped to bring it to console saying: "Conversation is an essential part of this game, there is a whole lot of reading, we've got a million words in this game. We wanted to make this game not about killing people and taking their stuff."

Designed to be more about exploration, adventure and learning things, Tides of Numenera slightly deviates from Planescape and aims to deliver a more narrative experience through character depth. In fact McComb stated that you do not exactly get experience for killing things in the game, which reinforces the focus on exploration and discovery.

"Planescape Torment was a lot about the metal and the rust and I guess the dustiness of things breaking down," said McComb. "We wanted to provide a slightly different experience because we also wanted to move away from the green and the grey that seems to be permeating so many games, we wanted to make a colourful, different, interesting experience."

Tides of Numenera has been developed closely with the community after a successful Kickstarter and has now moved into Early Access. McComb had this to say about the goal of the project in relation to what the fans want:

"We are very very intently focused on making a thematically satisfying story for our players, something that will make them think and imagine, I guess answer the question, what does one life matter?"

"It's an RPG that almost borders on a visual novel given its heavy reliance on text and story over combat, grinding and character development."

Fixes a number of issues that have plagued InXile's RPG.

We play a couple of hours midway through the game on PS4.

The first two hours of Torment: Tides of Numenera

Watch us take our first steps as the last castoff.

Check out the press kit for Torment: Tides of Numenera

The huge RPG has been let loose, and Bengt is giving it a go.

Torment: Tides of Numenera gets a new story trailer

Get a taste of the lore before release. 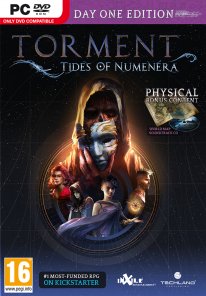