The room where we're sitting is fittingly decked in giant tennis balls and rackets, as 2K Czech's Stéphane Dupas talks about how Top Spin 3 had become too hard to learn for newcomers to the series. Then he starts bragging about the changes the developers now have made in the newest entry in the tennis series. "It was important for us to make the game easier to learn," he says, "while at the same time keeping the depth that makes Top Spin hard to truly master."

By adding several new optional help functions, 2K Czech has made Top Spin 4 more accessible for the inexperienced masses. A Timing Display shows you if you're too fast or too slow on the trigger, a "First Bounce Helper" marks where your opponent's strike is going to hit the ground and a "Fatigue Gauge" gives you information about how much power your player got left in him or her. Another new function is the "Quick Tap", which makes it possible to do a very precise, but weak, hit.

"The TS Academy has also seen a total makeover," Stéphane continues. "We have added a lot more lessons, that very much focuses on teaching simple principles and solutions to actual problems."

The lessons are now divided according to your playstyle. If you're a defensive line player you'll learn how to move fast and and how to wear down your opponent with long, slow strikes. If you're offensive you'll learn how to compensate for your lack of movement and how to finish your strikes fast and with raw power. In the same way a so-called "serve-and-volley-player" learns how to combine speed with a good serve, fast reactions and volley skills.

"At its core, it's all about using your own strengths while taking advantage of your opponent's weaknesses. Top Spin 4 is like a fighting game. At one end of the scale we find the small, but dexterous, players that can run around like there is no tomorrow. On the other end we find the big, heavy power players that have to use their brutal strength to survive. Everyone can beat everyone else, you just need to press your advantage."

When it comes to your own created player you'll gain experience points when playing online or locally. These experience points will gain you levels, up to a maximum of 20. For every level you gain you'll need to decide which player style you want to spend your skill points on. "You can't create the perfect player," Stéphane says with a smile. "You will have to choose, depending on how you want to play. You can create an allrounder, or an expert in a specific area."

The final addition the developers bring up before the presentation comes to an end is trainers. As your tennis career starts taking off, and you start to climb the rankings, you'll be able to get better and better trainers. Every trainer has specific challenges for you, and by completing them you can get extra skill points or get better in the play style the trainer is an expert in. You can obviously only have on at a time and if you decide to shift trainer you'll lose the skill bonus the former gave you.

As the presentation wraps up, it's finally our time to play. I get to face off against a British colleague, who straight away decides to play as the top player of the last couple of years - Roger Federer. To his great surprise I skip Rafael Nadal as my own choice and instead I go for the guy in the blond mullet. Federer will have to face the merciless, two-handed backhand of the Scandinavian tennis hero, Björn Borg. And three sets later, the Norwegian-Swedish union as showed its class and the vikings take home the glory.

My first impressions of Top Spin 4 is that it flows a lot better than the previous game. The animations are vast and they slide into each other in an almost scary realistic way. Generally, the graphics are very impressive. So much so that when I grabbed lunch I first thought that they were showing the game on the television set in the dining room - turns out that it was the highlights of the ATP tournament in Qatar the week before.

There's also no doubt that the game has become a lot easier to learn. Within 15 minutes I had already started to time my strikes correctly, using the new visual aids. I also enjoyed using the "Quick Tap" and I scored more using that then raw power. Hopefully the different strikes will be balanced and that one of them won't turn out to be much better than others.

Everything I saw of Top Spin 4 felt a lot better than the previous game, at least that's how it felt after the short session I had with it. I'm looking forward to see the full game release in March, but it remains to see if this is the game that could make the greater masses interested in the sport and not just be a game for them that are already interested. There's at least no doubt in my mind that the quality is there.

PREVIEW. Written by Kim Kristiansen (Gamereactor Norway) on the 20th of January 2011 at 17

In development at Mafia II studio 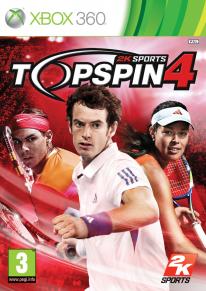