It has been almost fifteen years since the original Destroy All Humans! first released. Since then, we had a sequel, which was dropped shortly after but then the series sort of dissolved and became legend. Fortunately for us, THQ Nordic is in the business of resurrection, meaning the fan favourite title is getting another shot at existence. We got hands on with the demo at this year's Gamescom and we put together a video preview of what we saw, you can check out it out here.

In Destroy All Humans, you play as Crypto-137, an alien invader tasked with learning the ways of humanity and simultaneously reducing as much of it as possible to ash. The title, which is notoriously known for its science-fiction pop-cultural quips and dark sense of humour is currently being developed by Pandemic Studios and Black Forest Games. Throughout the storyline, you will be taken all across America, fighting bizarre enemies with your overwhelmingly powerful arsenal, in an accurately reimagined world that uses the same sized sandboxes that are much more densely packed.

Destroy All Humans! currently doesn't have a release date, although it is slated to drop in 2020. As for more information coming out of the fan favourite franchise, two collectors' editions were recently unveiled for the release, as well as a new Stadia trailer, demonstrating the playable demo at Gamescom 2019.

Join us as we jump into the shoes of the tiny green spaceman Crypto.

Destroy All Humans! remake is invading Nintendo Switch on June 29

Two special editions along with the standard version will be rolling out on Switch.

Could a remaster of Destroy All Humans! 2 be on the way?

A new trailer for the remastered original appears to offer a teaser.

The Gamereactor team is seeking world domination in Destroy All Humans! on today's GR Live stream.

We unbox the Crypto-137 Edition of Destroy All Humans!

15 years after its first invasion of Earth, Crypto and his buddies are back to ask more probing questions of humanity.

The remake of Destroy All Humans! ships with a previously unreleased, fully-restored mission titled 'The Wrong Stuff'. 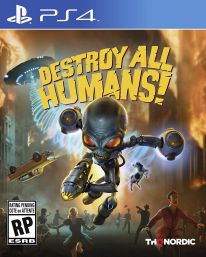