Gamereactor recently got the chance to talk to Microids' Cyril Berrebi to learn more about the long awaited latest instalment in the Syberia series, Syberia 3, and Berrebi revealed that the game is designed to be played with a controller as well as on PC.

Berrebi said "for the first time [it] has been thought to be played on console but of course on PC you can still play with the mouse, but on the controller we thought from the beginning to be played with a joypad. It's the first time the game is in full 3D."

"You have direct control of the puzzles," he continued, "for example the beginning of the game, to show how it works, Kate has to use a knife to unlock something, and you have to press the A button [on the Xbox controller] to do the movement, to unlock the box. It's the same for all the things in the game, all the close-ups are played like that."

"We think a lot of fans will enjoy this third game in the series, that is if they can ignore its dated presentation."

The first two hours of Syberia 3

We step into the shoes of the charming Kate Walker.

Bengt steps into the long-awaited sequel.

Get a sneak preview of the Syberia 3 soundtrack

Syberia 3 gets new trailer unveiling the story of Kate Walker

A key character from the series returns. 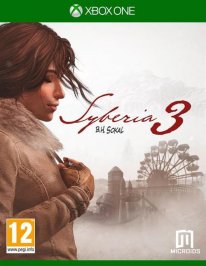