The other day we had a very fun morning of rivalry at Nintendo's Showroom. Several members of the press gathered to test some of the new features coming in Super Smash Bros. for Wii U, just a few weeks before the game's release. On the one hand we were there to test the game, on the other we went to find out firsthand how the Amiibo figurines work in their first game on Wii U (check out our extensive HQ photo gallery).

Smash Bros. Wii U: a grand return to TV and couch

It would be virtually impossible to list and describe all the options included in Super Smash Bros. for Wii U, at least in an easy to digest text, so we'll mention the elements that caught our attention and refer you to this comprehensive and slightly overwhelming Nintendo video, with "50 must see things" from the game:

What this video doesn't reflect is the feeling of playing with a controller in your hands, with a screen in front. To play Super Smash Bros. for Wii U for the first time when you've spent a healthy number of hours with Super Smash Bros. for Nintendo 3DS feels as if you've just plunged your face into cold water. It makes you sit up and take notice. Don't get us wrong, the experience on the handheld is still brilliant (troublesome online multiplayer aside) and really well adapted, with the circle pad and the tiny 3D screen doing their best to keep us happy. But wow, what a pleasant change. What a relief. With this smoother and more beautiful spectacle on a larger screen, and controlling it with a resistant but sensitive analog stick; it not only enhances the visuals and the accuracy of the controls, but it also enhances the emotions you'll experience.

"Click-clack-cleck, tack-tack". These are plastic noises that no paltform holder in their right mind would want from a more elegant modern console, but here they are filling the room, taking us back to the early years of this millennium. Indeed, we're talking about the noisy, but for this game ideal, Gamecube controllers. They're extremely important for Smash with those eight well-marked stick directions. That big A button. Those combative triggers. The subtle vibrations when in the menus or in combat. The direct wired connection. All this, of course, can't be found on the 3DS. And you can't find them on the standard Wii U controller either. Just try it. Grab the Wii U GamePad and move the stick in circles. They're just not as well suited for playing Smash.

If you're a true Smash aficionado, go dust off your old Gamecube controllers and start thinking about getting that USB adapter so you can connect them. But, keep in mind each adapter requires two USB ports (one for power), and so if you can bring together eight Smash veterans you'll have to do some fancy stuff to get everything connected. Remember, however, the game supports all Wii Remotes and Wii U controllers, and you can even use a 3DS as a controller if you own a copy of the game on handheld. There's plenty of options.

We were pleasantly surprised by the new option of facing up to eight fighters. We don't know about you, but we sadly don't have a large enough sofa at home, but for the right players it could be an essential new feature. We enjoyed 8-player Smash, playing it on different stages and with various setups, not just because it multiplied the on-screen chaos, which of course it did, but also because we found a different flavour of fun in amongst all the confusion, and because of how it mixes up the tactics and the gameplay constantly.

Maybe in the 8-player version of the standard Battlefield stage an agile character isn't that interesting, but a strong character is able to dispatch several rivals at once. But neither can it be too slow, because rivals won't even let you move under the barrage of hits if you're too lethargic. You'll also have to work out how to survive and attack in different ways. In other more complex 8-player stages you might consider a faster fighter that can move quickly and deftly between platforms.

In the (not final) menus we counted 14 stages that have been readied for 8-player Smash, with extended versions of the standard levels (Gaur Plains with a gap in the middle, bigger Ness City), normal-sized options (Battlefield), and then stunning new designs that have been offered up for the eight player brawls. In this latter group we tried The Great Cave Offensive several times, a tribute to SNES-era Kirby with a labyrinth of lava, rocks, and an environment so complex that at first you have the challenge of finding where your fighter is. It's fun and varied with so many elements to consider, but all downed characters respawn at the top of the stage, so the battle is often concentrated at the top, avoiding many of the traps (but also the juicy item chests) found below. Again, 8-player Smash increases the confusion and multiplies the madness, leading to many more laughs and plenty of disorder, but also allowing players to changes up their tactics.

Your Amiibo is your Amiigo

Well, first of all we have to make something very, very clear about Amiibo figures, which we did not fully understand until now, and we're sure some of you haven't grasped either. You have to see your Amiibo as a friend, as pets you teach things to, similar to a Pokémon you train. In Smash Bros., and unlike Skylanders or Disney Infinity, you are not that character. You assume no control of it. They learn from you, yes, and they learn a lot, but they're your teammates, your colleagues. Each Amiibo statue is an independent AI that learns from your combat skills and levels up imitating what you usually do in a game, but you can never put yourself in their plastic shoes.

This means you can train against them or add them to your team, and then take them to a friend's house so, Pokémon-style, you can duel to see which one is the better trained. Or they can accompany you in multiplayer battles and you can end up turning them into formidable opponents for others to play. Nintendo told us about Amiibos with more than 30 hours of 'life' that acted just like their owners: using objects or avoiding them, blocking incoming attacks all the time, focusing on Smash or special moves... Amiibo can climb up to level 50 (they won't be stronger or smarter, but they reach their peak performance), but from that point on, there is still more for them to learn.

And here we had the first big question: "hold on, if I naturally play in a different way with Bowser, Ganondorf or Toon Link, do the Amiibo learn three different styles for these three different characters and their toys?" Nope. The AI will collect your performance data in general (very precisely, that's must be said), and apply that to your figures, but it doesn't distinguish between characters. We'll see how all this works in the medium to longterm, because considering them as playmates and pets to train is interesting, but the concept of a 'general personality' is currently more difficult to get excited about.

The Amiibo section is listed under the multipurpose "Games & More" menu, where you can define their settings, skills (stats) and special attacks, just like you would with the standard character editor. Furthermore Amiibo will also unlock plenty of additional trophies for your collection as you play longer. Each Amiibo can be linked to a Mii on a console, so your Yoshi is different to your sibling's, and you can always clear any progress made, which basically resets the figurine's chip.

All this data is stored in the figurine itself so you can carry it around and use it on multiple consoles and in various games. The process of reading and writing is almost instantaneous when placing the figurine on the Wii U GamePad NFC reader when required to by the game, and when it's time to fight you simply take it in turns to do so via the character selection screen.

In our 8-player Smash matches we played with five human, two Amiibo (marked by the FIG letters on the screen) and a normal CPU fighter, and the truth is that the behaviour and the level of the Amiibo clearly showed. There was a level 21 Kirby Amiibo who wasn't indestructible, but that did make it really difficult for us to win. The Pikachu Amiibo we'd just got out of the box and registered, however, wasn't that fearsome, as it was just learning its first lessons. In the first match it went up five levels, but then developed more slowly, RPG style. To reach level 50 you need about ten hours of playtime with each Amiibo.

Understanding what we do now, and after experiencing it firsthand, the truth is that we are now more inclined to buy at least 3-4 Amiibo figures, as they'll add new meaning to playing multiplayer modes alone, and so we can get put them into battle against our friends. It would would have been nice if we could have accompanied these Amiibo characters in some online multiplayer matches, but this feature wasn't available for testing. Not that Super Smash Bros. for Wii U will be in any way lacking with regards to single-player content (we won't talk about that now, or we'd need two more pages - you'd better watch that video at the beginning once more), but the Amiibo concept provides an interesting alternative when considering an already very complete game.

"It's a masterpiece, and the game that every fan wished and hoped Nintendo would make."

Announcement incoming in the summer?

The comeback was on, and he grabbed the opportunity.

This is his first major victory.

They may be launched with Super Smash Bros. on the Switch. 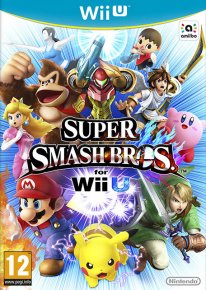