Raven Software's upcoming action title Singularity, first shown as a teaser at Activision Blizzard's off-E3 event this summer, is the main feature in the next issue of American gaming magazine Game Informer.

Quote from Game Informer's info about the issue:

"We blow the lid off of Activision's mysterious Singularity. The developer, Raven, needs no introduction however. The devs from Madison are hard at work on this new sci-fi shooter that features mind-bending gameplay that not only has the player jumping through time, but using it as a weapon (let's see how well an armed enemy does when he's instantly aged into bones and dust!). Set on a small, unnamed island occupied by the Russians, Cold War tensions raise once again when a U.S. pilot discovers the horrific truth that became of experiments with element E99 in the 1950s."

I have to say I'm not entirely convinced, but I'm holding off judgement until I've seen it with my own two buttons...

Raven Software's Singularity was released without much fanfare from Activision, but is it worth any of your attention?

As in the game, not the Kurzweil kind 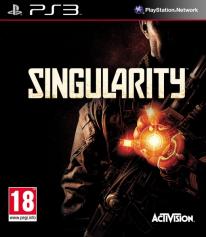