Everything you see on screen happens as part of the simulator - nothing in the game happens simply for looks. Everything has a cause.

It's one of those statements that's difficult to test as a player. One can only accept the developers promises at face value. But as I'm sitting here, randomly clicking the inhabitants of my town, I get the feeling that they're not kidding.

If I click on a car, I'm told where it's coming from and where it's going. One car is being driven by a factory worker on his way to work. Another by a man who wanted to get a burger, but is now heading home because he couldn't find a burger joint (note to self: make more commercial zoning). The people on the local football field are - coincidentally - playing football.

I soon stop my poking around in the everyday business of random citizens, as I only have about 20 minutes of hands-on time with this demo, and there are more important things to do. Half my town lacks water. Fire fighting coverage is insufficient. My sewage plant can only barely keep up. There's a need for housing, stores, factories. Little notifications keep ticking in, and speech bubbles over my town hall and the people's heads tell me what they are in need of.

The amount of information, that potentially has to be digested, is simply staggering - even in this little demo, where my population barely exceeds 2500 people. But the way it's all served is nothing short of elegant. All the information in the world is only a few mouse clicks away, but I'm never presented with more data than exactly what I need right at this moment. Zoning colors are only shown when I have the zoning tool up. If I click the button for sewage plants, I can literally watch as the turds flow through the sewer pipes, and see where the system is over capacity. The same principle applies to power, the fire department, water supply, you name it. It is a joy to use.

I click and I click. Family houses go here, roads go there. This lot is for stores, this one for industry. The tax money is rolling in, and my citizens are happy. I'm expanding as fast as I can.

I get offered a mission. The weathermen predict a heatwave coming up, increasing the risk of fires. Am I up to the task? There's a reward of $50,000 if I succeed (and my current income is around $3,000 an hour, so it's quite the sum), but I pass on the offer. All I want to do is build, build and build, seeing as my time with the game is so limited.

Before I get my hands on the demo, the Maxis devs talk about some of the new features they've revealed here at Gamescom. How SimCity has a Citylog, inspired by the Autolog and Battlelog of Need for Speed and Battlefield, where you can see what your friends are doing and take up challenges based on that. How the game has a global economy, built on supply and demand - the price of oil is on the rise, for instance (that sounds familiar), and with a bit of foresight you can earn big bucks by specializing your city in the production of exactly those goods and commodities, the economy is demanding. There are global challenges that players can work together to solve - such as growing unemployment, making the creation of new jobs critical.

At the moment though, I'm focused on the family houses I'm building. I'm considering whether to build a bypass from the population-heavy westside of my town to the industrial areas to the east, to relieve the main street. Build, build, build. Click, click, click. I am completely engrossed. "It's still an early alpha", the developers explain, referring to whatever weird bugs or quirks the game might contain at the moment. If they're there, I haven't noticed - I could take this demo home with me and be completely happy, is my impression.

But just as I'm looking into upgrading my city hall, which will allow me to build better sewage treatment (right now all the sewage literally ends up in a hole in the ground), an alarm goes off with flashing red lights. A meteor shower is heading right for my town! I can only watch as one fiery piece of space rock after another slams into my creation, lighting all of it on fire as my citizens scream in terror. "Than you for playing SimCity", says the demo, that apparently was running on a timer. You're welcome. Now get here soon!

"After a decade on the sidelines Sim City finally makes its return."

SCBuildit made for fans of the city builder.

Get downloading and go offline!

Cities of Tomorrow DLC for SimCity

SimCity gets Cities of Tomorrow expansion 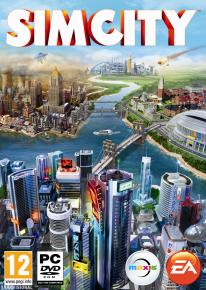