Pro Evolution Soccer 2018 may well release the very same date as its predecessor, September 15, if the date set by Amazon Italy is anything to go by (a placeholder, we understand), which also includes mockup PES 2018 boxart which we've included below.

According to this product info, the game will release on PC, PS4, and Xbox One, but not for the Nintendo Switch. It will, however, still keep the old-gen versions for Xbox 360 and PS3, according to Amazon.

When we recently asked Senior Director of Brand & Business Development Jonas Lygaard about the game, he jokingly said that expecting "a [PES] 18 is a good prediction," but didn't want to share details on a reveal. If Konami follows last year's strategy for the announcement though (PES 2017 debuted in Milan along UCL finals), PES 2018 will be first shown to the press on June 3, right before the Champion League final and in the midst the PES League world finals. 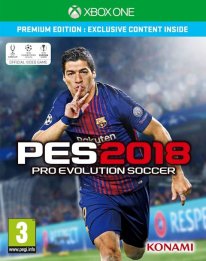