Capcom have released some info regarding the upcoming Resident Evil 5 demo (already out in Japan). The demo will only be available in Europe and North America for one week on Xbox 360. No mention of Playstation 3 in the press release. We assume money hats or technical issues are involved, but do Microsoft and Sony really go after demo exclusivities and do they actually work (in other ways than infuriating fans on the other side)? Who knows. I thought I'd copy and paste the press release so you get the actual wording - because the (d)evil is in the details. As always.

"Xbox 360 gamers worldwide won't have to wait until March 13, 2009 to get their hands on the highly-anticipated "Resident Evil 5." The next installment of the landmark survival horror franchise from Capcom will take action to a new level with a two-level, playable demo available exclusively on Xbox 360 for one week beginning Monday, January 26. In the demo, players will have a first glimpse of the fear they will never forget, as "Resident Evil 5" makes daylight just as terrifying as darkness. Additionally, a new exclusive high-definition trailer of the game, shown only at the past Tokyo Game Show in October of 2008, will be made available for download on the Xbox LIVE service on Friday, Jan. 16.

Fans will have the opportunity to experience "Resident Evil 5's" revolutionary new features early, including two-player co-op with voice chat along with new characters, weapons and environments. The demo is set within two stages from the beginning of the game - Assembly Place and Shanty Town -- featuring plenty of co-operative action, shooting, hordes of bloodthirsty infected Majini enemies and a few puzzles to round out the action. The demo has three levels of co-op play: single-player with AI support, two-player split-screen on a single Xbox 360 and two-player across Xbox LIVE.

Xbox 360 gamers will also be first to take on the new enemies in battle, including an army of weapon-wielding infected Majini, the gigantic hooded Majini Executioner and even the dreaded Chainsaw Majini. Players can also choose between the classic "Resident Evil"-style controls or switch to the newer "Action" controls inspired by games like "Gears of War 2" and "Halo 3."

In this hotly anticipated new title coming on March 13, Chris Redfield returns as the "Resident Evil" hero and heads to Africa where the latest bioterrorism threat is literally transforming the people and animals of the city into mindless, maddened creatures. Joining forces with a new partner, Sheva Alomar, the two must work together to discover the truth behind this evil plot. Utilizing the new co-op mode, players will be able to assume control of either Chris or Sheva and experience "Resident Evil" in new ways." 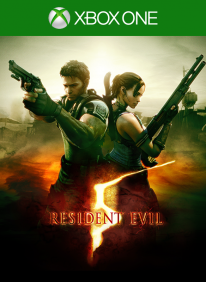