The original Garden Warfare proved one of the surprise hits of 2014, cleverly incorporating tower defence into an FPS format. That game simply exudes class beyond expectation. Can the follow-up perform a similar feat? Judging from the upcoming beta, this would seem so.

Plants vs Zombies: Garden Warfare 2 is all set for release on February 25, but ahead of this EA has announced an open multiplayer Beta to sow the seeds of excitement. And to water your appetite for that, Gamereactor was invited down to EA for a day-long session during which we had a good dig around this fun packed sequel.

As you will soon discover, the GW2 multiplayer beta is very generous in what it offers, even though it 'fences off' a great deal of the secrets that the full game is promised to contain. In any case, what's immediately apparent is how the presentation is expanded and improved.

As lead gameplay designer Chris Fox pointed out to us, there has been a significant Destiny influence in terms of how gameplay modes are accessed and in ways character progression is handled. Garden Warfare 2014 was a rough and ready front end driven from a basic menu screen. For 2016 we enter via a PvZ hangout called the Backyard Battleground. For those of you unfamiliar with Destiny, for PvZ this entails a new social hub area from which to launch missions, plus there are assorted booths that allow you to manage your crazy characters.

This Destiny influence is most keenly felt in the way that GW2 provides an almost holistic approach to time investment, and how compelling this may become on an ongoing basis. There's always something you can be doing to boost the statistics of your Plants or Zombies, which include attacking the rival faction in the Backyard Battleground or surviving waves of enemies in a fast paced strategic mini-game launched by raising the Flag of Power. Or, if you just want to try out the new weapons in your load-outs, there's a testing range in the sewer.

Even before embarking on the fan-favourite Garden Ops or the many player-versus-player game modes, Backyard Battleground is likely to prove a highly competitive hangout since completion times and score ratings are all tracked for comparison among friends. Since you can also invite up to three other friends to share in the Battleground shenanigans together, or choose sides, there's chance of entire evening sessions being absorbed here. You can modify world options to adjust difficulty settings for the Backyard too, spice things up!

Eventually you'll get sucked into the hectic multiplayer game modes proper, offered on a rotation basis for the duration of the beta: Team Vanquish, is straightforward Deathmatch; Vanquish Confirmed, same deal only (similar to its COD: Modern Warfare 3 muse) players are required to collect Crazy Orbs from fallen foes to earn points; Gnome Bomb is surely influenced by the bomb mode in Halo, where teams deliver an explosive to the rival's base; Suburbination is a zone control escapade. All of the above are returning modes from the previous game, but there's also Turf Takeover which combines new game mode Herbal Assault with the original Gardens & Graveyards as you fight for control of larger maps.

The playable character roster meanwhile has flourished and is tactically enriched with three new classes per team for a total of six new personalities. They're not entirely balanced in terms of like-for-like attacks, but hey this is all part of the craziness that is PvZ right?

All three Plant newcomers are comparatively noob friendly, although Citron's sustained Orange Beam takes a little practice to use effectively. Citron's special abilities are EMPeach, which stuns Zombies including the Imp's OP Z-Mech; Citron Ball, rolling into the fray, and Peel Shield that throws up a temporary shield to absorb all kinds of damage. Rose, with her Magic Thistles, is likely to become an early favourite owing to the maddening Goatify ability transforming Zombies into goats, but her Time Snare that disrupts the flow of time is cool too. Must confess to never quite getting the hang of 'invulnerable' Arcane Enigma... Lastly, Kernel Corn (get it?) carries a Corn Crusher gun, he's the assault-most guy there is in the game, with Buster Barrage sending a steaming hot potato that rains butter like napalm, Husk Hop that executes a Woo-style leaping cartwheel above opponents while still shooting, and the Shuck Shot that's a charge-based missile launcher. Yep, the Kernel is a beast.

We are informed that there are 102 character variants to unlock by earning points from Quests and performance in PvP, and among these a possible 4000 items for customisation. Each character variation has eight unique upgrades, to apply whenever you please, and everything is linked to the EXP-style promotion system designed to reward the grind.

Overall, the Garden Warfare 2 beta gives a heartening sign of how the entire premise has been massively expanded, intelligently and passionately reworked to withstand at least another solid 12 months of intense playtime. On the strengths of this, PvZ2 appears firmly established as a very much welcome evergreen to add to the plot.

We heartily recommend taking part in the feature-packed Plants vs Zombies: Garden Warfare 2 beta, which runs from 14-18 January. Further details on how to download the client for Xbox One and PlayStation 4 are available over on the official site, www.pvzgw2.com.

"This is as hardcore as you want it to be, but also so casual that anyone can have fun."

Gear up for the holidays in the Festive Edition.

Trouble in Zombopolis: Part One adds a new map, new characters and lots of tweaks.

EA offers a 10 hours trial period for the full game on Xbox One until May 10.

Free update already available for PC, PS4 and Xbox One.

We livestreamed the PS4 and Xbox One versions yesterday. 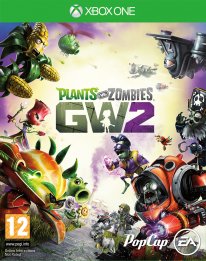