Obisdian Entertainment's last work payed homage to comedy series South Park in this year's well-recieved The Stick of Truth, and now the developer's turning its attention to the classic fantasy RPG works like Baldur's Gate with its Kickstarter-funding project Pillars of Eternity.

We got a first glimpse of the game at E3, and we caught up with director Josh Swayer directly after to discuss how the team has defined the game's look and kept the work distinct from the majority of titles set in similar fantasy worlds.

"We went back to the late 90s and the style of art that was being developed in that era," he explained. "Which doesn't seem that long ago, but if you go back and look at a lot of that art, it doesn't look like the art that is developed for fantasy now.

"The style of weapons and armour was much more dressed down and practical; even the lines they used to construct the shapes of the armour were very different. The characters themselves seem less exaggerated, more subdued. The colour palettes are a little more muted, less super colourful and intense. So we went back, looked at all that, and a lot of that informed our colour palettes, silhouettes of characters, and the shape and materials used on their outfits. We tried to make something that looked more old fashioned and simple."

We then asked what came first: the heroes or their world? Turns out if you're building a new world from scratch, schooling helps.

"I have a degree in history and I approach it from the concept of ‘what is the past? What is the past that has caused the current situation to exist?' And I think of how cultures move through areas, how language is developed, what wars were fought, what treaties were signed, how people have formed their beliefs about the gods... life and death, things like that. Those thoughts help inform an idea of a place where a variety of stories can take place.

The fantasy trope often is that we have elves that are their own society, Dwarves are Scottish for some reason... and we broke that a little bit. We're going more with the idea that different races have commingled for quite a while so they have more a cultural or national identity than a racial one. So over time what was previously distinct is moulded or unified."

The game imagines its story choices not as cinematic cutscenes but as lines of text coupled with beautiful inked sketches of the situation, recalling the older 'choose your own adventure' novels. Seems that's the inspiration that Josh and the team are trying to invoke from players.

"It's just cool," he laughs when asked about the design choice. "One of my favourite RPGs is one from 1992 called Darklands. And Darklands had these illustrated sequences with these paths you could choose and they'd illustrate how they play through. because we rely very heavily on writing and our dialogue, not a lot of little cutscenes, we felt it was more appropriate to allow the player to use their own imagination in those sequences. This game is being developed for people we feel want to read, they want to use their imagination, who want to fill in the blanks. And we give them a lot of material to do that with. it felt like a fitting storytelling element."

You can watch the entire GRTV interview below.

"Obsidian's invented a time machine. We're back to the brilliance of the 90s RPG, with pre-rendered environments, isometric viewpoints and intricate stories with tons of text."

Both titles won't cost you a penny to download until December 17.

Pillars of Eternity releases on Switch next week

This version will feature the game and all DLCs, and Obsidian says it's made possible by the 70,000 backers.

Pillars of Eternity is coming to consoles in late August

It gives insight into Pillars of Eternity's development.

The White March Part 1 is coming this month. 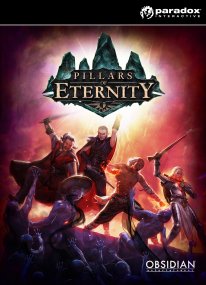