If you are like me, then you probably don't spend too much time if any looking through the instructions booklet of a video game these days. Tutorials and controls schemes in-game make them a bit obsolete. But sometimes things that are of great interest appear in them.

This is one of those occasions as Rockstar teases more Grand Theft Auto on page 13 of the Episodes from Liberty City booklet. The text reads "Liberty City, It's Over!" and "Next stop.", and below that we get a small peak at something looks like a mountainous landscape.

There is also a small snippet that reads "opens March everywhere". Now there are more than one way to interpret this. Could there be another downloadable episode in the makings with a new region or is it time to move on to Grand Theft Auto V? It would be rather weird if a brand new Grand Theft Auto game would release as soon as March, but perhaps they are teasing the full announcement of Grand Theft Auto V, which would make sense. Or perhaps they are talking about March 2011, but what's the point of announcing a release month at this point? A third downloadable chapter set in a new region available on both Playstation 3 and Xbox 360 would also make sense with the "opens March everywhere" line in mind. But at this point it's pure speculation and Rockstar are unlikely to reveal more until they find it suitable.

Episodes from Liberty City on PS3 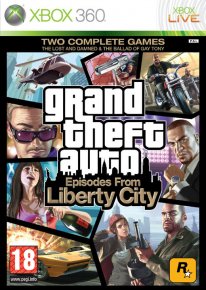