What do you do when the floor is made of lava, hoards of enemies are attacking, and all the while a huge boss is bombarding the few places you can actually stand? The answer is: let a magician set up circles for healing, while the most durable warriors run around and draw everyone's anger, while two others stand as far away as possible and send a hail of arrows raining down over the boss.

If you love games like Baldur's Gate: Dark Alliance, Victor Vran and, of course, Diablo, you'll quickly feel at home with Minecraft Dungeons. Don't let the blocky exterior fool you, though, because that's only what's on the surface and underneath there's a standalone experience that lets you go on adventures with your friends, collecting loot and defeating enemies together. There's even a story that ties everything together and that tells the story of the misunderstood Arch Illager and how he comes across a powerful object that he now uses to carry out his evil deeds.

The story, however, doesn't work as much more than a loose framework to hold everything together and give your actions meaning, and only on a few occasions do your actions in-game have an obvious impact on the story. Instead, it's all about having fun - and you will have fun, especially if there's a couple of you playing together. Minecraft Dungeons supports co-op both locally on a shared screen and online, where it is also easy to get started (and for anyone who is chasing Achievements, it may be interesting to know that the game also supports individual profiles locally).

You each choose characters that are the same except for their appearances. They are designed as typical fantasy stereotypes and constructed from Minecraft blocks, although anyone who wants to can also play as Minecraft protagonist Steve. The actual game world you are exploring also consists of the same rough blocks that fans will know all too well, which gives the game a distinctive style where the primitive design of Minecraft meets high-resolution visuals and nice effects.

The visuals have both positive and negative implications. Where the former fortunately dominates, at the same time the graphics make the game less obvious and harder to read. While the various locations you visit are often nicely designed, as everything is made up of the same building blocks things can sometimes blend into the background. Furthermore, the procedural level design doesn't always work out as well as it could and sometimes we found ourselves exploring areas that yielded a big fat nothing instead of the nice loot we were hoping to find.

For the most part, it is still a beautifully designed world that greets us, where each area has a distinct theme. For example, we might be exploring near lava, or through caves, swamps or huge pumpkin fields. And as you likely have guessed already, these locations are filled with enemies, which in many cases will be familiar to anyone who knows their Minecraft. One of the first things we noticed was that Mojang has worked hard to really streamline the experience.

So much has been trimmed and optimised that anyone can get started and begin having fun after just a few minutes. Take, for example, something as standard as a healing potion. Instead of collecting or crafting them, or buying the maximum amount you can each time you reach a village, where they also often have different levels of potency, here you have an unlimited number and they're tied to a button. On the other hand, they're on a long cooldown timer, so if you drink one when you have only taken a little bit of damage and are then thrown into a giant mob, you won't be able to heal for quite some time. If you do fall in the line of duty, you need to be healed by your friends quickly, otherwise, the fun is over.

Not once during our time with Minecraft Dungeons did we find ourselves spending too long in tedious menus focusing on potions and the like, and the rest of the experience is just as smooth. For example, you can dash if needed, but again the move is on a cooldown timer. Your weapons and the equipment you find can be scrapped instantly and turned into money with the push of a button, while you get back the experience points you spent on them. This setup encourages you to try out different items because if you don't like what you've got, then it's totally okay and easy to fix. In addition, the waiting time is minimised when your friends spend time in menus during local co-op, which will be music to the ears of anyone planning on playing with a fussy adventurer who likes to tinker.

Since all the characters have the same features, it is the equipment that sets them apart, and it is a good idea to try and coordinate on this front. You will need a healer, you'll need those who are good at distance attacks, and it really makes sense to have a few tricks prepared by adding smart artefacts. Fortunately, you visit a central hub between each level where you get the chance to sort everything out concerning your equipment, and there you can optimise and try to find fun combinations. Our favourite weapon was probably a crossbow that we could equip with flaming bolts.

Before each stage, you and your team are given a recommended level of difficulty that matches your ability. In general, however, we would say that playing that way is quite easy and perhaps points to the game's core audience. Nudging up the difficulty level makes both the game more enjoyable and it gets you better loot. Then, once you've played through the adventure, there are additional difficulty levels to tackle. Minecraft Dungeons feel like a game we will play through at least a couple of times, probably more if we find friends who want to join in and take on the highest difficulty levels.

Strangely, we think the best and worst things about Minecraft Dungeons stem from the same aspect that we were being so positive about earlier; namely the super-optimised game system. While we hope that developers working in the same genre take note, paradoxically, we had hoped for a little more depth. Maybe we're just old and conservative, but it feels like any personal attachment to a character is lost when you can go from being a semi-immortal healer who keeps the team alive to, 30 seconds later after getting some new loot, becoming an über warrior with a classic Minecraft pickaxe. In the end, we think the game would have benefitted from having distinct classes and unique skills.

That said, Mojang's new dungeon crawler is still a nice surprise, and you shouldn't let the word "Minecraft" in the title fool you either. This is an adventure that stands on its own two feet, and if you've been looking for a new adventure to play with your friends, we highly recommend it. Sure, we don't think anyone is going to call this one a masterpiece, but on the other hand, we find it hard to see how anyone wouldn't have fun with it either.

HQ
Gamereactor UK
+
Charming aesthetic, accessible, fun to play, good co-op.
-
It's too streamlined in places and would have benefited from classes with unique abilities, sometimes details are lost in amongst all the blocks, procedural generation isn't always great.
is our network score. What's yours? The network score is the average of every country's score

The first will be called The Cloudy Climb and will bring a new single player activity. 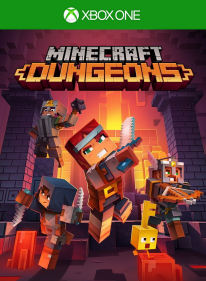