If, like us, you've got fond memories of huddling around a small square screen as deep as it was wide, racing pixelated cars on twisting tracks that punished even the slightest mistake, then you were probably looking forward to playing Micro Machines: World Series as much as we were.

This is actually a sub-genre that has been visited a couple of times of late, with Toybox Turbos (also by Codemasters) and Table Top Racing: World Tour both looking to fill the gap left by the extended absence of Micro Machines (obviously, we're not counting the mobile title released last year). Both games did a solid job of realising the basic premise (that being: little cars racing around domestic environments), but neither delivered what you might call a "definitive experience", and nostalgic memories of hard-as-nails local MP on the Mega Drive have, for many of us, prevailed over modern interpretations.

And thus the stage was set for a triumphant return, where the newest iteration of the game that once ruled supreme in the top-down racing genre could come back and reclaim its crown. Alas, that's not quite how it worked out, and in the end Codemasters has delivered a game that doesn't quite scratch the Micro Machines itch that's been niggling us for many a year.

The most obvious flaw here is the lack of modes. There's just not enough to get your teeth stuck into and drive the kind of grind that the game obviously wants you to invest. There's no career mode, no tongue-in-cheek story mode complete with a flimsy story; simply put, it's lacking in terms of infrastructure. While you might have a lot of fun racing around snooker tables, or dodging cereal and gas-powered cookers, there's just not enough trimmings built around the core gameplay loop to facilitate a long-term addiction.

There are some good racing modes in there. The standard races are the main course, whereby twelve cars rip around tracks that snake left and right, picking up weapons which can be used to slow their opponents, taking advantage of shortcuts hidden in plain sight. There is a selection of nicely decorated environments to speed around, and the cars themselves look great. At first, and for the first few plays on each, it can be extremely tough, punishing almost to a fault, but once you've got the knack of each track and muscle memory starts to sink in, you can actually have fun with the racing. Learning the tracks, however, wasn't particularly fun, and our initial impression of the game was pretty negative.

The cars are very floaty in terms of handling, and careful control is essential lest you drift off the track every five seconds. To make matters worse, when you respawn you'll often be tempted to immediately go at full speed to catch up, but often the placement of the spawn means a burst of speed will send you straight off the track again. This lessens with experience, but even after several hours, we found this little quirk remained frustrating. Another annoyance: once you get stuck in the chasing pack, you're much more likely to get taken out by weaponised opponents, slowing your attempted comeback considerably at times. That said, after a few hours, we started to enjoy the game a bit more, even if it didn't fully click.

Beyond the standard race mode there's Elimination, whereby players who drop off the pace (and the screen) are "eliminated", until only one remains. Highlander-stylee. Rinse and repeat until someone has won the overall match. It's a very stop-start mode, and it can take a while to settle things if the contestants are evenly matched, but it's good fun and offers a change of pace (if this mode sounds like your jam, check out Speedrunners).

Then there's the Battle mode, which abandons the track racing and puts teams into arenas to play objective-based modes like Capture the Flag and King of the Hill. There's a limited selection in terms of modes, but it does add some much-needed variety to the mix. These modes take advantage of the abilities of the various vehicles, each of which has its own main attack, plus specials that are on cooldown timers. We quickly warmed to the GI Joe Mobat Tank (thanks to its powerful standard attack), and El Incendio (just because it looks cool), but each of the twelve vehicles has its own style, and it won't take long for you to find your favourite.

Throughout your time in the Quick Play part of the game, you'll earn XP and level up. Like in Overwatch, each new level drops a loot crate that, when opened, yields up four items. These are all customisation related, from the catchphrase spoken by each ride, through to different paint jobs. New skins ensure variation on the race track, and some of them are really cool. There's a lot of items to unlock, and it might take a while to randomly find that one skin you're after, but everything can be unlocked using in-game credits that are also earned over time.

Beyond the Quick Play modes, you can race the same events in either the ranked playlist, or offline against your friends. Ranked matches are just the same in execution as their more casual counterparts, although here you compete over a season to prove you're the best. Offline modes, however, yield no XP, although you can tweak various modifiers and make the experience a little more bespoke, setting up your local matches as you want them (although, it's worth noting, you can't Race in local multiplayer, it's single-screen Free-For-All and Elimination only). If you want that kind of variation from an online XP-giving mode, you'll have to wait for special events. The first one is about to drop, it's called Mystery Vehicles, and it's a battle-only playlist whereby you get a new car with every respawn (future events include Chaos, Pure Racing, and Endurance).

Each of the modes considered on its own is fine, and once we'd got over that initial difficulty spike, we started to have some fun with Micro Machines: World Series. However, when considered as a whole, the package feels just a little bit underwhelming. The focus is very much on online competition, but often (even after launch, hence the slight delay in publishing this review) we were competing against mostly AI-controlled bots (with cool retro-avatars, it should be said). On top of that, the online nature of the game renders all XP-related activities obsolete if you're net connection drops, and we experienced a lot of very minor instances of lag, where the game would hang for a fraction of a second while everything caught up. Throw in the lack of modes and you're left with a game that may well struggle to hold the attention of its audience over an extended period of time, which is a shame as the unlock system is deep and has clearly been built around the idea that lots of players will work hard to unlock the various skins for each car.

When it's at its best, this new Micro Machines is a blast. Unfortunately, though, it didn't have enough under the hood to grab ahold of us and keep us playing. Ultimately, we're once again left waiting for the definitive top-down racer. Maybe World Series will grow to be that game given time, but as it stands at launch, the finishing line still feels a long way off.

Gamereactor UK
+
Cars and tracks look good, some fun modes, deep unlock system.
-
Not enough ways to play the game, races can be overly frustrating at times, some lag, XP tied to online activities.
is our network score. What's yours? The network score is the average of every country's score

"Throw in the lack of modes and you're left with a game that may well struggle to hold the attention of its audience over time."

Join us to get into the nostalgic spirit.

See the chaos unfold ahead of its June release.

A tiny trip down memory lane with some toy cars.

And some brand new screens to go with it.

The classic series is back.

Micro Machines: World Series is coming to PS4 and Xbox One

Codemasters are returning to the classic top-down racing franchise. 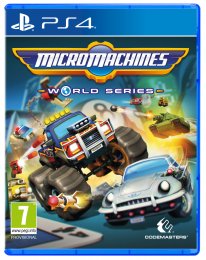