The wristband which grants admission into the world of Samus Aran is greenish and made of thin paper. Right on time at 13.15 it gives me access to the VIP gaming zone at the Nintendo Media Summit in London. 45 Minutes with Metroid: Other M. One of the most beloved Nintendo franchises, revered by hardcore fans. Its predecessor Metroid Prime 3: Corruption is one of the best action shooters on Wii. What can you do with such a famous franchise? You could play safe and do another sequel, for example. Or take the essence and make something new out of it.

Metroid: Other M wants to be a cinematic action game, a Nintendo employee explains in sober tone before the intro trailer rolls. First shock: Samus speaks - considerably less sober, but with a very feminine, almost erotic voice. She comments on the events of her own history. Metroid: Other M is set in the aftermath of the SNES game Super Metroid, where Samus Aran destroys Mother Brain, all Metroids and the planet Zebes along with the space pirates. The last surviving Metroid on Zebes assists her with the devastating shot from her arm-cannon against Mother Brain. This Metroid is a larvae, a baby, but protects Samus and sacrifices its life for hers. In Metroid: Other M we are going to delve deeply into what happens next.

Samus seems to be driven by the experiences on Zebes. She is convinced that the baby Metroid is responsible for some of her special abilities. The first minutes of the game are spent waking up after the fight and exploring Samus' abilities in a test lab. Samus is controlled in the standard third-person-mode with holding the Wiimote crosswise, which gives a very retro feeling. Her skills are well known by now; jumping, shooting, and transforming herself into the Morph Ball. In addition, her shot can be charged to a strong attack.

If the Wiimote is rotated from horizontal to vertical we morph into the helmet, right into first-person-mode. From this perspective, Samus can scan her surroundings or objects, lock on enemies and shoot missiles. You can no longer walk around, though. The change of perspective kind of fits the game, but it's not convincing. It robs the speed from what is otherwise a fast, intense action game. At least, that's how it felt during the intro-level on the Bottle Ship.

Samus has traveled there after receiving an emergency call that has been encrypted as a baby's cry, as the cry for help from the believed dead Metroid larvae. All this is told in high resolution video sequences that will make up a significant part of the game. The events start on the Bottle Ship where Samus meets an old friend: Adam Malkovich. He was her first mentor and her commander when she was still serving with the Galactic Federation. Conflict between Samus and Malkovich is inevitable, but for now she is also willing to follow his orders.

The first level mostly consists of generic corridors, interrupted by larger rooms with the same generic metal and platform structures. It's also quite dark in there, even for a out of service space station. In one of the large rooms a small boss is waiting for us. It's built from thousands of small crawling creatures that first scramble out of the body of a dead scientist and then out of every crack of the Bottle Ship. The beasts combine themselves into a purple monster that Samus fights together with her new colleagues from the Federation Army. The soldiers freeze the monster's tentacles with Crypto-guns, while we avoid them by jumping around. Then we have to quickly raise the Wiimote and fire rockets at the frozen tentacles.

This all works, as I said, well. But especially in later levels with increased pressure and stronger opponents such a double control has potential to create nothing except more stress. Personally, I wasn't 100% convinced by the gameplay.

Other details appear almost immature. On some doors there are terminals, which Samus has to use to open the door. As gamers we have learned to walk up to a terminal and press, for example, the A button. In Metroid: Other M they've taken that particular button press out and Samus now press the button if we stand two seconds in front of a terminal. Let's be honest: taking away that last bit of work doesn't make life any better.

The graphics are, measured by Wii standards, very beautiful, even outside the well made cutscenes. However, in the first level there wasn't much to see of the space station, except for very dark corridors, dark rooms, and some colorful opponents. The sound works great, with heavy weapon effects and great voice-acting. The background music, historically an important factor in the series, was unfortunately still missing.

REVIEW. Written by Petter Hegevall (Gamereactor Sweden) on the 3rd of September 2010 at 11

The team behind Ninja Gaiden has been tasked with bringing back Nintendo's classic Metroid-series and our Swedish editor Petter Hegevall has gone on the hunt together with Samus Aran.

An avalanche of Other M

Tons of new screens from Cologne

An exact date this time around

Metroid: Other M in September

In Europe, August in the US

Concept art from Other M

A single picture of Samus 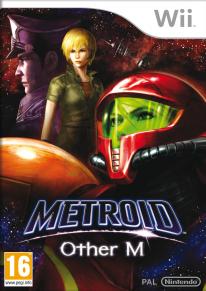