It's hard to write about Majin and the Forsaken Kingdom without mentioning The Last Guardian. The two Japanese projects have a lot in common, at least at first glance. They are both action adventures set in fantasy worlds where a boy bonds with a much larger creature, and their bond and friendship is the key to progress within the game. So while you will literary be standing on the shoulders of the giant Majin, the game also finds itself in the shadow of the eagerly awaited title from Team Ico.

But Daisuke Uchiyama will tell you that they came up with the idea long before The Last Guardian was announced, and to be honest Majin and the Forsaken Kingdom seems like a very different experience from the one Team Ico is preparing.

- The reason that we created this game is that there is a gap in the libraries of Playstation 3 and Xbox 360. There is a lot of alien and zombie shooters, but puzzle solving in the vein of Zelda is missing, says Uchiyama.

But Majin and the Forsaken Kingdom is far from a simple Legend of Zelda clone. It has its own unique style, gameplay mechanics and appeal. In many ways it looks more traditional than The Last Guardian, as there are health bars, a system for levelling up your characters and their friendship.

- The artificial intelligence is the most important part of a game like this. We did not want to make Majin in a perfect creature who always does as he is told. He should be a little flawed and random, Uchiyama tells us.

I spent just over half an hour with this imperfect creature, from the start of the game where a young boy, who came from the deep forest urged on by talking animals to free an ancient ogre called Majin whose powers could help restore a land cast in shadow. Before teaming up with Majin you go through a few basic stealth and combat tutorials. Nothing out of the ordinary and as you befriend Majin and head out you will also learn how to command him and combine with him for stronger attacks.

- We thought about including a co-operative mode, but it didn't fit well with the friendship theme we were aiming for. If you play as both characters you won't form the same bond as if you get to know a character different from yourself, says Uchiyama.

Agreed. One thing I wasn't a fan of with Majin was his speech. He speaks slowly and sounds a bit dumb to be honest. I think it might be something I could quickly grow tired of when playing the game properly.

Once I've escaped the castle with Majin we starts to recollect parts of his lost memory. He's been locked inside the castle for a century and drained of his powers, but he now recalls a young girl. She should be more than a hundred years old by now, but this is a fairytale and I think it's safe to assume she will have an important role to play further into the adventure.

The combat is intense and varied. There are both strategic and tactical concern you have to weigh as the lives of both characters are in your hands. Powerful combination attacks is the way to go when you want to finish an enemy off, but at times you will have to work against numerous enemies and try to weaken them before combining with the Majin. You can tell Majin which enemy to focus on, and as your friendship grows we were told he will naturally start doing things you want him to do.

The first proper puzzle I come upon takes a little time to figure out. There is a catapult in the middle that you can use to throw rocks or yourself. The rocks break walls that open up new routes, but in order to reach certain walls with the rocks you need to find a second weight to help further the reach of the catapult. It took me well over five minutes or so to perform all the steps of this puzzle and progress, and if that's anything to go by I'm sure Majin and the Forsaken Kingdom will provide enough of a challenge for our tiny grey cells.

Majin and the Forsaken Kingdom has been flying a bit under the radar, but could very well be one of the big sleeper hits of 2010. Keep an eye on it!

REVIEW. Written by Jonas Elfving (Gamereactor Sweden) on the 25th of November 2010 at 12

A thief and his monster go where the wild things are in this fantasy adventure from Namco Bandai. Find out whether the budding friendship between man and beast survives our review.

ARTICLE. Written by Lorenzo Mosna (Gamereactor Italy) on the 27th of October 2010 at 12

Take a look behind Majin

There is a big difference between standing on the shoulder of giants, and standing in the shadow of one. Majin and the Forsaken Kingdom manages to do both.

Steve caught up with Game Republic's Daisuke Uchiyama to talk about the inspiration for Majin and the Forsaken Kingdom and the relationship between the two main characters of the game.

We chat with Daisuke Uchiyama 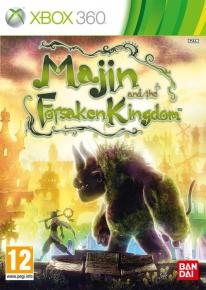