Yet the little brown guy doesn't look very adventurous at first. So we've got to deck him out, and in preview version we've been playing, there's already countless utensils for exactly this reason. From shoes to hair, beards to new eyes: it's easy to get lost here for quite some time just individualising your Sackboy.

Dressed to impress, we turn out attention to the new Little Big Planet story, to have a look at what interesting worlds the community has created, and prove ourselves equally as hard workers and our own planets.

In Story mode, plenty of worlds are awaiting us, and shows how varied the Vita version really is. Familiar mixes with new: Sackboy first pops into a futuristic world in order to hack a computer to gain valuable information. An easy job with the PS Vita functions.

We use the touch capabilities to push blue blocks out of our way, marvelling as our fingerprints appear then fade from each one we touch. Things speed up when we're chased by a red laser, stick and touch controls getting Sackboy to the next save point.

Also useful is the rear pad's touch sensor, letting us pull larger blocks from the wall. With one finger we manage to block the laser fire as we push blocks in its way. We lead Sackboy onto a small platform and glide it to the other side of the level by tilting the Vita.

Yet even with these new elements we feel immediately familiar with Little Big Planet. The controls are smooth and everything looks great in high definition.

Another situation, and in a world strongly reminiscent of Limbo and Super Meat Boy. By touching the screen we control a black lump with large white eyes in a dark and stylish wood. The goal is to break smaller white lumps - black eyes, and a bow atop their heads - from cages throughout the level. Our black lump rescuer jumps from wall to wall, sticks to green slime, slides on ice or bounces from blue liquid.

The latter one is helpful to jump over dangerous saws. Miss and there's frustration: even nearing the end of the level as we are, lack of checkpoints means we're right back at the start. Yet even with that issue, the level proves addictive once you've grown used to the controls, and one we hope is included in the final game.

For those who feel being alone in the world is only half the fun, you can join another player's games at any time or let them be part of ours. We trial Versus mode, in which we control a small tank trying to shoot our adversary. With a bird's eye view of the battlefield, we rumble around houses and use small buildings as makeshift pinball tables, surprising opponents by bouncing cannonballs off their walls.

Soon, however, it gets a bit old and doesn't offer much variety past the first few rounds.

As far as away from boring as you can get is a circus race, which we try and finish as quickly as possible to gain some extra score points. We try to jump through hoops, hold on to acrobatic bars and to jump on trampolines. Afterwards, who needs a break when you can accept challenges by other players in worlds of their own making?

No matter where we are and what we decide to do, we are accompanied by an incredibly good soundtrack, which provides plenty of atmosphere and leads us to play some levels again just to hear the backing track. We really hope that there are a lot of these songs in the entire game.

The passion, the fun that's went into the making of this game can be felt even in the opening few hours. It's as good as its home console siblings, and the handheld features are integrated smoothly and feel remarkably unforced.

If the full game can convince as much as this preview build, then Little Big Planet has the potential to be one of best games for the Playstation Vita - and a definite reason to buy the console. 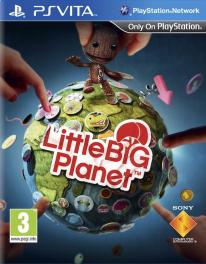