Traveller's Tales has become intimately associated with the Lego series, and they are keeping busy. This time it is the cherished Harry Potter series that gets the Lego treatment.

The first thing that struck me was that Traveller's Tales keep a good grip on the story to make it as accurate as possible, while they add the familiar Lego humour. The intro sequence shows Harry's arrival at his aunt and uncle when he was only an infant. After this the game takes a leap in time and we get to witness when Harry first finds out what Hogwarts is. The house of his aunt and uncle is invaded by an owl with a letter welcoming Harry to the school of magic and sorcery.

In the beginning there are only a few playable characters, in order to ease players into the game. It starts out in the pub The Leaky Cauldron, where both Hagrid and Harry are playable. At this point one can not use magic, but you get an introduction to the basics of the controls. As you may expect there is plenty of stuff to collect, including ingredients for elixirs.

There is a lot of stuff to enjoy, even before you learn magic. Harry can help students and have a look at the animated paintings, or just have a look around and explore the premises. The level of detail in the first few scenes was impressive and there are small nods to fans of both books and films here and there.

When you first get access to Hogwarts a lot of sites are blocked off. This is simply in order to ease the player into finding their way around Hogwarts. Lead Designer Arthur Parsons emphasized that Hogwarts, will be a huge area to explore, but that it is better to start with a smaller area, and open up more areas as you get familiar with it. At Hogwarts Harry meets with his friends Hermione and Ron, and at this point they will also become playable. This is also when Harry begins to learn magic, and the developer stays true to what happens in the books. Harry is good at most of the magic, while Hermione is always a notch ahead. Ron, however, is largely a disaster, and this leads to lots of comedy.

In the classrooms, Harry learns new spells, and the first one we get acquainted with is Vingardium Leviosa, which make things float in the air. To learn the formula you need to complete various missions using it, and this works amazing well. And if you happen to get bored there is always something else to do.

Another fun element is the first Quidditch hour. Perhaps one of the few areas where Hermione is not the supreme ruler, and when you direct her broom it is almost impossible not to smile. She staggers and looks anything but graceful.

Each character has his or her strength of course: Harry is good with the broom, Hermione is best with magic formulas, and Ronny has his pet that can creep into the small and confined areas. Although Ronny might seem pretty useless at times, there are still missions where you are totally dependent on his special abilities.

Towards the end of the game, you will probably have played virtually all of the characters from the Harry Potter universe, and there are lots of them. Arthur Parsons laugh well when we ask exactly how many playable characters there will be:

- A hundred plus. With plus, we believe that it probably will be well over a hundred.

Simply put, there will be more than enough to keep us busy. And since the game spans the first four years there is a lot of ground to cover. It will be interesting to see if the game will be able to keep up the high level of quality that I witnessed throughout the whole game.

When I asked Parsons about the humour in the fourth sequence of the game, given that the mood of the books was much darker to begin he reassured me that they kept the story the same - but that some humour would always be present. They haven't taken the story dead serious, but kid around with the mood. It is going to be interesting to see how this is implemented.

Apart from the humour, I was interested to hear about how different puzzles were designed. Parsons emphasized that it is not going to be overly easy for those a little older, but that there will consistently be opportunities to do things either a very simple way, or choose to make things more complicated - and be rewarded accordingly.

At first look it is hard not to enjoy the latest Lego game. Much depends on whether the developers have put as much love and effort into the rest of the years as well, or whether it ends up being boring and repetitive towards the end. However, from what we have seen there is every reason to remain optimistic.

Harry Potter, Hogwarts and Voldemort have all been turned into Danish Lego. Does the TT Games Lego-formula still work?

PREVIEW. Written by Kristina Soltvedt Wiik on the 22nd of February 2010 at 13 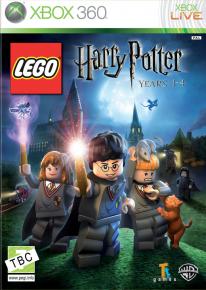 Harry Potter and the Philosopher's Stone

Harry Potter and the Half-Blood Prince