It has to be said that Batman was a perfect fit for a Lego game. The caped crusader and his boy wonder sidekick provided us with a great set up for a co-operative experience and the game was a success, in fact it cleared a million units in the United Kingdom alone, and to be honest it's a bit of a surprise that we've had to wait this long for a sequel to surface.

"Whenever we come into a story world, or a story universe, we are incredibly greedy. We want to have everything," says TT Games head of production Jonathan Smith. "We know fans want everything as well, so we don't stick to one side of the story, just to the comics or just to the animated series. We try and pull everything together and mix it up and then do a Lego take on it as well. So you'll see things in Lego Gotham City you haven't seen before, but just feel right in a Lego world."

The positive aspect of the long wait is that this is far from a rinse and repeat job. Sure there was nothing wrong with the first game, but in DC Super Heroes TT Games are really turning it on. The introduction of an open world hub in the shape of Gotham City may be the second biggest change next to the inclusion of Superman, Lex Luthor and the Justice League as part of the storyline. The open world element may not be revolutionary, but adds a nice element of exploration that doesn't necessarily involve a lot of backtracking and repeat play of levels to unlock all the secrets. Gotham City is made up of all the components you would suspect, from the asylum to Wayne Tower, and when you play as Superman you're free to soar around the city in your cape.

As you'd expect Superman's flying does prove handy when trying to reach certain areas, but there will be lots of secrets where you will need to use specifics suits (Batman or Robin) to conquer them even in the open world. An example of this would be an electrified area where Superman can't land (he doesn't die, but still he can't be there) where you will need Batman's electricity suit to progress. Using various suits and finding out how to go from where you can change into a certain suit to where it's needed is key to solving puzzles and finding gold bricks.

You can say a lot of things about Bruce Wayne and his cave loving alter ego, but he is no Superman. And Lego Batman 2: DC Super Heroes relies heavily on that fact. As Batman and Robin use their suits and gadgets to beat up villains, Superman simply soars the skies and makes use of his frost and heat vision to undo what evil deeds Lex Luthor and The Joker are up to. Batman and Superman don't really get along all too well, and you can expect some trademark Lego humour to illustrate the difference in their personalities. You will, of course, also be able to play as the villains and the full roster of playable characters is going to be 50 characters.

"We want to have you playing not just the heroes, but also the villains. And just the best villains. So our story is based around, Joker - the nemesis of Batman, teaming up with Lex Luthor - the worst enemy for Superman, those two super villains together," says Jonathan Smith. "So they're going to be the focus of the story, but then when everyone busts out of Arkham Asylum, they're going to be loose in the city and you're going to take those people down and then actually control them as well."

And that takes us to another interesting fact about the game - it features voice acting, something TT Games have refrained from using in their previous Lego titles. Sadly, the voices were not in the version of the game Jonathan Smith demoed at GDC, but given that TT Games have waited this long to include voices we expect them to be well integrated and not just a sloppy afterthought.

There is something very accessible and appealing about a Lego game from TT Games. It just begs you to jump in and play with a friend, and Lego Batman 2: DC Super Heroes is no exception to that rule. There is something appealing about a casual experience, that still provides hardened veterans with tons of secrets and challenges, and in doing so really provides something for every taste and age. Lego Batman 2: DC Super Heroes is due out on just about every imaginable platform this June. 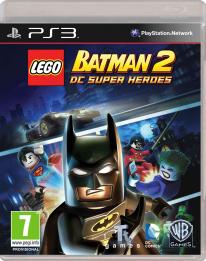