Even though it's the re-release of a 2011 classic, L.A. Noire on the Nintendo Switch will need users to download a rather hefty update patch at launch, November 14.

Users who purchase the digital downloadable version will get the whole updated package of 29 GB, but weirdly enough those who get the physical game card will also need to download no less than 14 GB to the system's free space.

In other words, this means the digital purchase of L.A. Noire makes having additional storage space via microSD mandatory, and the physical version will still fill up a good portion of the Switch's 25.9 GB default available space (that's if you don't have anything else installed/stored).

MicroSD usage aside, the situation is making fans wonder what's in the cartridge - either 14 GB of outdated data has to be replaced or, as many suspect, Rockstar is just using a 16 GB card and thus the update just completes a half-released game digitally. Either way, the company makes clear the update is required, as the patch is "containing required gameplay data as well as general bug fixes and improvements".

Only Cole Phelps knows the truth behind this mystery so far. What do you think?

"Despite its numerous flaws, we're still very much in love with this unique open-world adventure."

The morning sun seeps in through the blinds at the Los Angeles Police Department headquarters. War veteran-turned cop Cole Phelps fix his holster, pulls on his police hat and walks out the door into one of the most ambitiously designed game worlds ever.

The VR Case Files developer has announced that it's working on a new open-world game for Rockstar.

It looks like L.A. Noire: The VR Case Files is finally hitting PSVR

PEGI has snitched, so it seems like PC players won't be the only ones able to play detective in virtual reality much longer.

Watch us play two hours of L.A. Noire on Xbox One X

Today on GR Live: L.A. Noire on the Xbox One X

We revisit the adventure in glorious 4K. 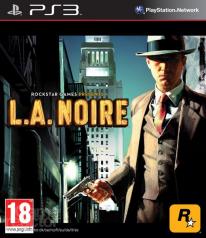