I'm just waiting for them to figure out where I'm hiding from watching the recordings of their kill cam. Meanwhile, outside the barn, life is going completely berserk and M1A3 Abrams battle tanks mercilessly roll over unprotected infantry units and Hummvees, C4 detonates and EMP grenades go off.

Not that I really care about the chaos. From the yet still safe cover I calmly collect Battle Points, the most important currency used in the action shooter Homefront. I cash in for accuracy, kill streaks and supporting my teammates. Battle Points can buy me a ticket into one of the mighty AH-64 Apache attack helicopters, so after the inevitable death as a sniper I can finally take off and bring death from above.

"Someone who hasn‘t seen a bullet in ten seconds is clearly moving the wrong direction," Lead Technical Designer, points out. Infantry, bombs, drones, vehicles, air strikes - it's all there almost right from the start. He has a point. The multiplayer madness surrounds the single player campaign where, in 2027, North Korea had invaded the U.S. and plunged the country into chaos and misery. The multiplayer maps play inside this traumatic scenario for Americans and suburbs, bombed cities and lonely farm areas in the Midwest, will all see battles between the communist army and guerrilla Americans.

The multiplayer seems to be the main selling point of Homefront. Up to 32 players can fight together in Homefront playing solo or in teams and the game will use dedicated servers for both PC and consoles. The war takes place on relatively large maps and a new spawn system ensures that you always end up in the middle of the action - you can for example spawn directly into the hot seat of a shooting Abrams tank, which has been bought by another teammate using battle points. You may buy your own vehicles before spawning (if you own enough battle points) or at worst have to walk back into the battle by foot. Either you want to accumulate points to be able to invest in big things like tanks and helicopters, or buy straight away to get smaller perks.

The battle points are seen as a way "to motivate players to play in the team" rather than being a substitute for experience points, Holinka says. This even worked quite well with the motley group of journalists that attended the event. But even better was the feeling that battle points enable different individual play styles in one session and one is finally being rewarded for exactly that. The road to the 1400 points for an Apache helicopter is in fact identical for each of the loadout classes, but still plays completely different for each.

In my session, I played the mode Ground Control on two maps where alll players start on the same front line and have to take three capture points. If one teams succeed, the goals move somewhere else and if the point level is reached, one team wins. The Cul-de-sac map is suited up for eight against eight players and drives us through a bombed out U.S. suburb. The graphics looked pretty decent, with the code we saw being taken from very early stage of development. Pre-Alpha is usually not very easy to judge, but Homefront has the potential to look at least as good as the bigger IPs when it's finally done. Particularly the suburban map shone with many small details in the front gardens that produced an effect of vivid sadness. A very fitting venue for a guerrilla war in an oppressed America.

All the standards we are used to aren‘t neglected by Kaos despite the battle points system. Homefront will have level progression, a ranking system and unlockable stuff - but for further details we have to wait. 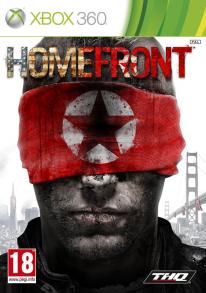