We sat down with Disney Infinity executive producer John Vignocchi at GDC to get a closer look at some of the features and toys and powerdiscs that come with this upcoming gaming platform. Vignocchi had a lot to say, resulting in what is possibly the longest single answer to any question asked on GRTV. Ever. Then again there sure is a lot that can be said of the ambitious Disney Infinity.

"Initially we were working on a sequel [to the Toy Story 3: Video Game] that was based on Buzz Lightyear's Star Command, but then as John Pleasants joined the organisation, who is our president right now. John actually came in to us and said to us: "I really want you guys to think big. not just about creating a game, but creating an experience". Then at the same time we had been talking with and working closely with the creative team at Pixar on what we could do with all the different properties that they have. And so, Infinity actually evolved from there. We came up with the idea of - what if we could create a platform? What if we could create not just a one off video game, but something that we can start with a grow over time."

Speaking of the wealth of properties available to the team, Vignocchi had this to say:

"It's really exciting cause the Walt Disney Company is the largest entertainment company in the world. And Infinity is intended to be a platform that can support all things Disney. So the possibilities are infinite with what we can do."

Vignocchi also went on to demo the powerdiscs that will be sold in booster packs and come in two varieties - the ones that boost character abilities and the ones that add new content. The former can be used in combinations as well to provide even more bonuses for your character. 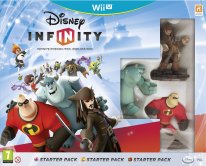