How does Grand Theft Auto go with Nintendo DS? Massmurder on the touch screen. Not exactly the image we have gotten so far of Nintendo's family oriented handheld. But as I sit down with GTA: Chinatown I'm relieved to find Rockstar aren't holding anything back.

The main character is a member of the Chinese triad and when the game starts he is sitting in a plane headed for the land of opportunities and more specifically for Liberty City. He is out to avenge the murder of his father and deliever an ancient sword to his uncle, who is next in the family line, but first and foremost he is in it for the money, the women, and expensive intoxicants. As he arrives at the airport he is greated in true GTA spirit as the bullets hailed down on him.

It doesn't take long before the first evidence of how Rockstar have taken advantage of the unique DS features is revealed. Presumed dead you get stuffed in the backseat of a car that gets dumped of a pier. Time to make use of your stylus to hack out the rear window and swim for freedom. Whatever you are up to Rockstar have made sure the two screens are put to use whether it be to sort through e-mails, weapons or other goods. Back in your apartment you will find a map that shows your progress in the game, and the option to replay missions. You can upload your best efforts to the Rockstar Social Club site to compare your abilities to other up and coming gangsters. During the missions the touch screen is put to use throughout and it doesn't feel gimmicky at all. Choosing your weapons, navigating menues are a given, but there are also things like hotwiring cars, picking safes, and mixing a molotov at the local petrol station.

I find it a bit challenging to use the stylus to choose direction and speed for what I'm throwing while bullets are flying. There is nothing wrong with the mechanics, but it still leaves me unsure. I'm assured that it only takes a little getting used by the office big cheese who passes me by. Time will tell.

It is no secret that the DS is technically challenged when compared to Sony's widescreen handheld, but Rockstar have still managed to cram all of Liberty City into the cartridge with impressive detail, the exception being a small island that was left out. The compromise is that you see the action from above, sort of like the old days of GTA (pre-GTA III). The city is surprisingly dynamic and alive, and just as in its full blown brethren there is traffic chaos, the occassional car chase and altercations taking place on the streets of Liberty City.

Liberty City is still a criminal melting pot. Gangsters from all over the world will fight each other and you without a second thought. The celshading and cartoony look lends itself well to Liberty City, while the character models are a bit lacking in detail. They still serve their purpose as you take a break from the missions to engage in a classic GTA car chase where you end up in the hospital. The pedestrians may not be as advanced as we are used to, but they still curse, pull up their umbrellas when it rains and scream as you run them down.

A consequence of the perspective and graphics is the violence doesn't come across as blatant as in other GTA's. Rockstar makes up for this by having you dealing drugs. Throughout the game you will find or buy evertyhing from weed to acid and crack, that you can pass on for the going street rate. There is a working economy calculating the prices and if supply is limited in an area you can make plenty of cash providing them with goods. Different areas have different tastes in drugs, and there is a surprising amount of depth you can deploy as you try and maximise your drug profits in Liberty City.

As always driving is an essential part of the GTA experience. Rockstar have worked hard making sure there is a subtle correction system in place that allows the player a smoother and more enjoyable driving experience. It feels like there is a sort of auto-aimin place, and it works very well. If you get in a car chase you will have to play by the rules until your stars dissipate to have a peaceful ending to the chase. The result is a more arcadey experience.

When you're not driving you are probably shooting. And thanks to an aggressive auto-aim function chances are also good you are hitting your targets. Hold the right shoulder button and you will aim for your the closest enemy, but even if you don't hold the shoulder button you will find that the bullets find themselves hitting objects close to where you are aiming. It's going to take a lot to stop you if your packing an automatic.

As we have come to expect the missions are what pulls the story along, and the crew in the testing room claimed it would take an average gamer 30-40 hours to complete Chinatown Wars. There should be no lack of diversity throughout the campaign as I blew up a bank, fried junkies from a helicopter, and used my sniper skills to execute a target during the five first missions I was allowed to play. Whether the quality lasts all the way through 40 hours remains to be seen, but if the first five missions are anything to go by we are in for something spectacular.

GTA: Chinatown Wars is out on Android

Old Nintendo DS adventure has also been updated for iOS.

The PSP version is out soon

How does the DS port look?

NEWS. Written by Marius Kvitberg Evjenth Translation & Adaptation: Bengt Lemne on the 20th of January 2009 at 17:16
0

PREVIEW. Written by Marius Kvitberg Evjenth Translation and adaptation: Bengt Lemne on the 20th of January 2009 at 17

How does GTA fare on the small screen? A touch of genius or the touch of death? 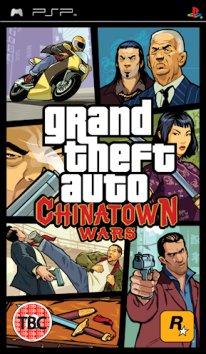