Eight lovely ladies. Ninja and soldier. Cyborg and serial killer. All eight are easy to look at, barely dressed and sport gravity defying bosoms. They also find themselves stuck in a virtual simulator forced to fight each other to the death. Only one woman can win and return to the real world.

The downloadable fighting game Girl Fight - may sound like the perfect game concept to your ears. Hot chicks that fight. Much like in Dead or Alive only without the male fighters and at a cheap price point. Unfortunately the developers at Kung Fu Factory have focused more on cup sizes than substance, which results in Girl Fight coming across as a scantily-clad window display for a shop that sells naughty underwear.

The peep show that makes up the arcade mode consists of eight fights that always finish with the same three second long end sequence. A new playable wonder woman is unlocked along with a nudie pic (!) of the character you just played as. Money earned can be spent on new special attacks, or more nudie pics for those who'd rather look at the game instead of playing it.

In addition to the arcade mode, there's a training mode and versus mode for two players, either locally or online. It may not sound like an overly impressive package, but as Girl Fight isn't a full retail title it would be unfair to compare the amount of content and production values with the best in the genre.

What you should expect from a fighting game, regardless of its price, is great gameplay. Here you're limited to one button to punch, one to kick and one to block. The combos you can perform with these three buttons are as few as they are shallow, and despite the fact that only eight characters are included, they still manage to play very similarly to each other.

The only thing deep about Girl Fight are the cleavages. Sure, the game isn't all bad, but just randomly and frenetically pushing all buttons shouldn't be a winning tactic in the arcade mode. It doesn't get better when every single animation, whether you move one step to the right or throw a punch, feels stiff.

As luck would have it there is at least one interesting feature to be found in the gameplay core of Girl Fight. Before you go into battle you pick two skills that are activated once you've built up enough power. Do you want to be able to become invisible and regain your health? Or perhaps turn yourself on fire for double damage during a limited period? This feature is the most redeeming factor in the title and it adds a strategic layer to a game that is almost completely devoid of any forgiving features.

As is the case with many games that feature well-endowed females, the developers have focused more on highly detailed character models and "sexy" animations than they have on gameplay. The game does feature a high and steady framerate - a must in this genre. Unfortunately the rest of the presentation disappoints with a generic user interface, boring arenas full of flat textures and brown backdrops.

Girl Fight has a few interesting ideas that could have been the foundation of something great. Unfortunately the rest of the game has been poorly cloned from existing fighting titles without any polish or character of its own. There are many, much better fighting games on the market in all price classes. And if you're into watching girls fight, there are also way better options out there for that too.

Yelling "cat fight" each time the female characters are matched up in this game gets tired quickly. But it might also be the most fun you're going to have with it. 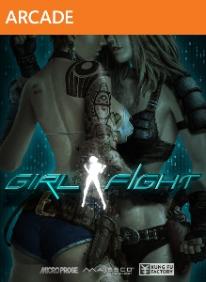