Fire Emblem Echoes: Shadows of Valentia is the latest entry in Nintendo's long-running strategy-RPG franchise. However, the title is only partially new; it's actually a remastered version of the second game: Fire Emblem Gaiden. Gaiden launched back in 1992 on the NES, and was never officially released outside of Japan. However, thanks to this new and improved 3DS edition, the old NES title is looking better than ever.

The story of Shadows of Valentia revolves around the growing conflict between two empires - Zofia and Rigel - which are fighting for supremacy in Valentia. In the midst of this conflict is Alm and Celica, the two chief protagonists of Echoes. They meet in early childhood and quickly form a very close friendship, a bond that will come to shape their lives.

We control both heroes independently, marching on two fronts against a common enemy. In the first two chapters, the leaders are separated from each other and Nintendo uses this to ease players into the experience. There is no tutorial whatsoever, but tips and the most important hints are displayed on the lower screen.

What with the original game having been around for such a long time, recent fans of the series will have to accept that the gameplay is more bare bones here. One of the biggest drawbacks is certainly the lack of interaction between characters on the battlefield, as everyone is fighting on their own again. The interesting support moves and possible combinations afforded by them in past titles are nowhere to be found here. Ultimately, though, there are more than enough advantages to fighting close to your allies and it's still a lot of fun to watch the characters as their friendship grows and they open up to one another.

Fire Emblem Echoes: Shadows of Valentia still manages to include plenty of surprises, such as explorable dungeons. This time we're getting a fully-fledged action-adventure component, including a controllable camera and modern 3D environments (although if and when we meet an enemy, the game reverts to the tactical view). Before the start of such an adventure, we have to set up our team so as to be prepared for every eventuality, because once we're in the dungeon, our chosen formation can't be changed. What makes these adventures such a challenge is the fact that our characters get exhausted as a result of their many battles. Once a unit is well and truly worn out, it gets a severe penalty and is very vulnerable from that point on. We can cure these conditions with consumables, but these items are limited in number.

The isometric camera sometimes leads to issues in battle, for example, when units take cover behind three-dimensional objects such as walls or high pillars, but we can then easily switch to the top-down perspective and control our units as if on a chess board. If a unit engages in combat, the perspective changes from the miniature view to the combat animation, which takes place in 3D again. These cut scenes still look good, even if they're much the same as they have been for years now (and the 3DS isn't the most powerful handheld system these days). Hopefully, Fire Emblem on the Switch will breathe some new life into the series in this regard.

Fire Emblem Echoes: Shadows of Valentia is basically running on the somewhat outdated engine used for Fire Emblem: Awakening, so the 3D sections are not on the same level as Monster Hunter or even Pokémon. In the cities or other locations, we move between separate screens like you would in an old adventure game. Your conversations with allies and other NPCs don't offer much in terms of animations, but one of the new features in Shadows of Valentia does wrap perfectly around this nostalgic design; we can take a closer look at our surroundings in search of secrets, using the newly introduced hidden object-like mechanic.

Fire Emblem has always been a challenging series, and during combat in Echoes, should you lose a unit in battle, Intelligent Systems has provided us with a powerful tool. With Mila's Turnwheel it is possible to reset a battle to an earlier stage and thus approach a situation differently. Permadeath is nevertheless in play, so save often and play carefully. As in the most recent Fire Emblem, you can opt out of the permadeath feature should you wish, meaning wounded units return after you've completed a mission.

Shadows of Valentia makes a strong first impression, especially in terms of the story, and it seems both ambitious and exciting. We did miss the support actions from more recent entries in the series at first, but even without these elements the game still seems to be in great shape. We spent about eight hours on the first two chapters alone, and found increasing pleasure in the constantly growing pool of playable characters. Particularly charming are the nice animation sequences made by Studio Khara, and the fact that even the side missions are now fully-voiced. Nintendo seems to have done a great job with this reworked take on Fire Emblem Gaiden, and we're already looking forward to freeing Valentia from the evil threat when the game lands on Nintendo 3DS on May 19.

"All in all, we can't escape the impression that this feels like an old game with a new look."

It costs more than the game itself.

Nintendo is taking a 25-year-old NES game out of retirement and is bringing it to the 3DS.

The female and male Corrin will get their own amiibos.

And there's a Limited Edition too

Intelligent Systems is definitely changing things up a bit.

Fire Emblem Echoes: Shadows of Valentia arrives in May

The 3DS exclusive is based on the 25 years old Fire Emblem Gaiden. 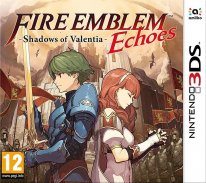